The Universal Tone: Bringing My Story to Light (Paperback) 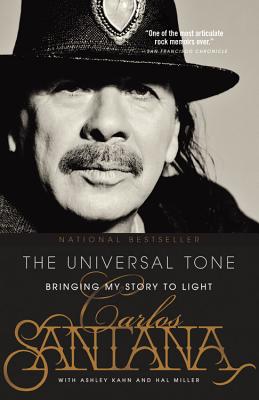 From poverty in Mexico to the '60s in San Francisco to Woodstock and decades of touring and great music. A true musician and a great guy. What a fun read! — Chris Morrow

The intimate and long-awaited autobiography of a legend.

In 1967 in San Francisco, just a few weeks after the Summer of Love, a young Mexican guitarist took the stage at the Fillmore Auditorium and played a blistering solo that announced the arrival of a prodigious musical talent. Two years later -- after he played a historic set at Woodstock -- the world came to know the name Carlos Santana, his sensual and instantly recognizable guitar sound, and the legendary band that blended electric blues, psychedelic rock, Latin rhythms, and modern jazz, and that still bears his name.

Carlos Santana's unforgettable memoir offers a page-turning tale of musical self-determination and inner self-discovery, with personal stories filled with colorful detail and life-affirming lessons. The Universal Tone traces his journey from his earliest days playing the strip bars in Tijuana while barely in his teens and brings to light the establishment of his signature guitar sound; his roles as husband, father, recording legend, and rock guitar star; his indebtedness to musical and spiritual influences -- from John Coltrane and John Lee Hooker to Miles Davis and Harry Belafonte; and his deep, lifelong dedication to a spiritual path that he developed from his Catholic upbringing, Eastern philosophies, and other mystical sources. It includes his recording some of the most popular and influential rock albums of all time, up to and beyond the 1999 sensation Supernatural, which garnered nine Grammy Awards and stands as arguably the most amazing career comeback in popular music history.

It's a profoundly inspiring tale of divine inspiration and musical fearlessness that does not balk at finding the humor in the world of high-flying fame, or at speaking plainly of Santana's personal revelations and the infinite possibility he sees in each person he meets. "Love is the light that is inside of all of us, everyone," he writes. "I salute the light that you are and that is inside your heart."

Carlos Santana was born in Mexico and is one of the most important rock musicians of our time. He lives in Las Vegas, Nevada.

"One of the most articulate rock memoirs ever."—Chris Willman, San Francisco Chronicle

"With its deep insight into the Mexican musician who usually lets his music speak for itself, this book is a Carlos Santana fan's dream.... And his message seems to be as profound as the universe itself."
—Felix Contreras, co-host of NPR's Alt.Latino, "NPR's Best Books of 2014"

"In this frank and impassioned memoir, iconic, influential musician Santana, 67, known for fusing rock and Latin rhythms, weaves together the rhythmic, domestic and spiritual dimensions of his career. Generously reflective and well-balanced.... Charismatic and soulful.... An appreciative and unpretentious chronicle, this is required reading for Santana fans and devotees of classic rock legends."
—Kirkus Reviews (starred review)

"Santana [writes] with the same searing intensity and blatant honesty displayed throughout his 45-year career in music.... The Universal Tone is a book examining a lifelong quest for knowledge and some sense of divinity... Santana deals with both in the same unflinchingly honest and dignified tone."—Jeff Miers, The Buffalo News

"From Tijuana, Mexico to Woodstock and beyond, legendary guitarist Santana spins a freewheeling ballad of his remarkable life."
—O, The Oprah Magazine

"The Universal Tone doesn't follow the usual well-trodden path of other rock star tell-alls... Santana sidesteps salaciousness for spirituality while taking readers through the touchstone moments of his remarkable life and career."

"A compelling and uplifting journey through his life and career."—Joe Bosso, Music Radar

"Entertaining and enlightening.... Santana's journey from obscurity and abject poverty to affluence and superstardom is expressed eloquently via an informal conversational style that captures the cadences of his speaking voice."
—Charles Waring, MOJO Magazine

"Universal Tone is every bit as tantalizing, succulent, and satisfying as the cactus fruit, roasted peanuts, and carne asada the author savored as a boy. And the sense memories peppering its pages are as frequent and visceral as the notes comprising his best guitar solos. Carlos doesn't merely tell us about his past; he lets us hear, smell, and taste it, too."—Peter Roche, Cleveland Music Examiner

"Fun and funky, The Universal Tone traces the arc of a singular life-yielding life lessons and inspiration to any reader.... Deeply honest and frank and richly detailed with his vivid memories, Santana's authentic voice shines through on every page."—WTSP 10 News