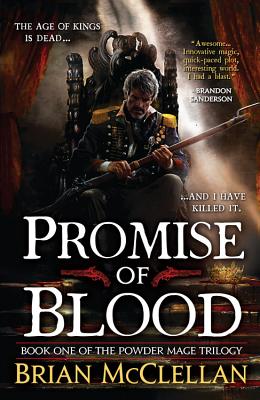 By Brian McClellan
Call or email to see if a used copy is available.
Hard to Find - May no longer be available

This is book number 1 in the The Powder Mage Trilogy series.

Ever wondered what would happen when you mix magic with an industrial revolution? Well, Promise of Blood is your answer. Field Marshal Tamas has overthrown the King and executed the corrupt aristocrats, now he must reckon with war, royalists, and internal strife. But when dark omens begin to appear, Tamas’ problems might involve far more than just angry citizens; they might just include battling the Gods. McClellan’s debut is filled with everything you love in a Fantasy novel. Political intrigue moves the plot forward, while the unique gunpowder and elemental magic weaves action into the story. However, the best part would have to be the incredibly flawed cast of characters. None of them are perfect, but that’s what makes them so easy to connect to. McClellan’s subtle character development and slow burning plot have proven him to be a master storyteller.

Civil unrest cripples the citizens of Adro in the aftermath of the revolution that obliterated the monarchy. Now, Field Marshal Tamas and his lieutenants must confront the true cost of freedom in book one of the Powder Mage Trilogy.

It's a bloody business overthrowing a king. . .

Field Marshal Tamas' coup against his king sent corrupt aristocrats to the guillotine and brought bread to the starving. But it also provoked war with the Nine Nations, internal attacks by royalist fanatics, and the greedy to scramble for money and power by Tamas's supposed allies: the Church, workers unions, and mercenary forces.

Stretched to his limit, Tamas is relying heavily on his few remaining powder mages, including the embittered Taniel, a brilliant marksman who also happens to be his estranged son, and Adamat, a retired police inspector whose loyalty is being tested by blackmail.

But when gods are involved. . .

Now, as attacks batter them from within and without, the credulous are whispering about omens of death and destruction. Just old peasant legends about the gods waking to walk the earth. No modern educated man believes that sort of thing. But they should. . .

"Promise of Blood is a hugely promising debut. Guns, swords, and magic together? What more could you want? How about tense action, memorable characters, rising stakes, and cool, cool magic? Not only the finest flintlock fantasy I've read, but also the most fun. Brian McClellan is the real thing."—New York Times bestseller Brent Weeks

"This book is just plain awesome. I found myself enjoying every moment of it. Innovative magic, quick-paced plot, interesting world. I had a blast."
—New York Times bestselling author, Brandon Sanderson

"Brian McClellan is an explosive powder keg of imagination with an expertly-plotted fuse. The stories he tells are the stories we'll be reading for years to come."
—Sam Sykes on Promise of Blood

"The world of the privileged sorcerers and the strange abilities of the powder mages who can manipulate gunpowder are just as well drawn in this captivating universe."
—RT Book Reviews (4 1/2 stars)