We Are Anonymous: Inside the Hacker World of LulzSec, Anonymous, and the Global Cyber Insurgency (Hardcover) 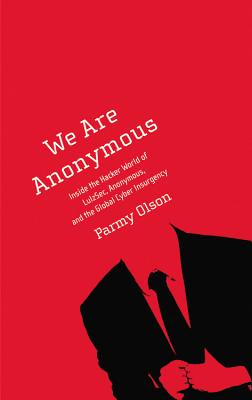 It's very likely that future conflicts will be fought on the Internet, and Parmy Olson has written a brilliant account of the opening skirmishes. Emerging from the message boards of 4chan.org, the infamous "black hole" of the Internet, a handful of hackers struck out at the Church of Scientology and other organizations. At first it was just for "lulz," but it became something much bigger. We Are Anonymous is a terrific real-life thriller--even at 400 pages it's hard to put down. But Olson has also pulled off something much more difficult: a touching story of friendship and betrayal, a map of a new immoral frontier, and the introduction of a new kind of anti-hero who rises above it all. An absolute must-read. — Charles Bottomley

A thrilling, exclusive exposè of the hacker collectives Anonymous and LulzSec.

We Are Anonymous is the first full account of how a loosely assembled group of hackers scattered across the globe formed a new kind of insurgency, seized headlines, and tortured the feds -- and the ultimate betrayal that would eventually bring them down. Parmy Olson goes behind the headlines and into the world of Anonymous and LulzSec with unprecedented access, drawing upon hundreds of conversations with the hackers themselves, including exclusive interviews with all six core members of LulzSec.

In late 2010, thousands of hacktivists joined a mass digital assault on the websites of VISA, MasterCard, and PayPal to protest their treatment of WikiLeaks. Other targets were wide ranging: the websites of corporations from Sony Entertainment and Fox to the Vatican and the Church of Scientology were hacked, defaced, and embarrassed, and the message was that no one was safe. Thousands of user accounts from pornography websites were released, exposing government employees and military personnel.

Although some attacks were perpetrated by masses of users who were rallied on the message boards of 4Chan, many others were masterminded by a small, tight-knit group of hackers who formed a splinter group of Anonymous called LulzSec. The legend of Anonymous and LulzSec grew in the wake of each ambitious hack. But how were they penetrating intricate corporate security systems? Were they anarchists or activists? Teams or lone wolves? A cabal of skilled hackers or a disorganized bunch of kids?

We Are Anonymous delves deep into the internet's underbelly to tell the incredible full story of the global cyber insurgency movement, and its implications for the future of computer security.

Parmy Olson is the London Bureau Chief for Forbes Magazine.

"A lively, startling book that reads as 'The Social Network' for group hackers. As in that Facebook film the technological innovations created by a few people snowball wildly beyond expectation, until they have mass effect. But the human element - the mix of glee, malevolence, randomness, megalomania and just plain mischief that helped spawn these changes - is what Ms. Olson explores best...We Are Anonymous also captures the broad spectrum of reasons that Anonymous and LulzSec attracted followers."—Janet Maslin, New York Times

"Olson keeps We Are Anonymous moving quickly, as she jumps around in chronology, using dramatic cliffhangers to tie the different strands of the narrative together while commanding attention... An eminently human tale."-—Rowan Kaiser, AV Club

"A remarkable inside account of the hacker movement."
—New York Magazine

"A masterpiece of shoe-leather journalism, a fast-paced, richly detailed account of the group's beginnings, various schisms and most spectacular attacks"
—The Daily

"Olson traces the origins of Anonymous, unmasking it leading characters to reveal their personal lives and motivations."
—Booklist, -

"Spellbinding account of mischief and mayhem....With all the makings of a fast-paced espionage thriller, Olson...meticulously and impartially recreates the operations of Anonymous and LulzSec."
—Publishers Weekly, -

"A detailed account of the hacker collective Anonymous and its splinter group, LulzSec....Certain to thrill 4chan readers, hackers and others on the Internet's fringe."
—Kirkus Reviews, -

"We Are Anonymous is a highly recommended entry point to begin to understand what that hidden culture is, where it comes from, and how it's influencing the mainstream. Olson doesn't just give the reader a recap of events since 2008 (the first en masse attack by Anonymous), her sympathetic account shows why people find Anonymous attractive, and why, despite its rough edges, much of what it does and stands for is something that should be promoted." -- PopMatters—-