A Terrible Glory: Custer and the Little Bighorn - the Last Great Battle of the American West (Paperback) 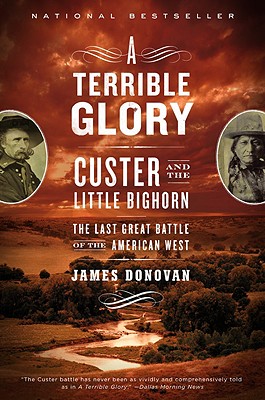 A Terrible Glory is a comprehensive account of events leading up to General George Armstrong Custer's unfortunate encounter with too many Indians in the Dakota territory on June 25, 1876 along a meandering stream called the Little Bighorn. Custer had been ordered to march his Seventh Cavalry down the Rosebud Creek and to join forces with another column that had been proceeding from the Montana territory. He had not been expressly forbidden (nor encouraged) to engage in combat with any non-treaty Indians. Badly underestimating the size of the band that his army eventually encountered, Custer advanced upon the hostiles. The furious battle lasted into the next day. The Seventh was decimated, the bodies of the fallen soldiers stripped and mutilated while their comrades watched in horror. Donovan's book also details the aftermath of the Little Bighorn debacle, the army's desperate attempts to make a scapegoat of Custer, and the trial of Major Marcus Reno, one of the commanders of the three units of the Seventh, who was drinking heavily and did nothing while Custer and his men were slaughtered (Reno later denied that he even heard any gunfire). A successful attempt to humanize a figure who has always been larger than life and a meticulous recreation of a particularly dark episode in the blood-soaked history of the West. ~ Reviewed by Alden Graves

— From A Terrible Glory

A rousing and meticulously researched account of the notorious Battle of Little Big Horn and its unforgettable cast of characters from Sitting Bull to Custer himself.

In June of 1876, on a desolate hill above a winding river called "the Little Bighorn," George Armstrong Custer and all 210 men under his direct command were annihilated by almost 2,000 Sioux and Cheyenne. The news of this devastating loss caused a public uproar, and those in positions of power promptly began to point fingers in order to avoid responsibility. Custer, who was conveniently dead, took the brunt of the blame.

The truth, however, was far more complex. A Terrible Glory is the first book to relate the entire story of this endlessly fascinating battle, and the first to call upon all the significant research and findings of the past twenty-five years -- which have changed significantly how this controversial event is perceived. Furthermore, it is the first book to bring to light the details of the U.S. Army cover-up -- and unravel one of the greatest mysteries in U.S. military history.

Scrupulously researched, A Teribble Glory will stand as a landmark work. Brimming with authentic detail and an unforgettable cast of characters -- from Sitting Bull and Crazy Horse to Ulysses Grant and Custer himself -- this is history with the sweep of a great novel.

James Donovan is the author of the bestselling books The Blood of Heroes: The 13-Day Struggle for the Alamo -- and the Sacrifice That Forged a Nation and A Terrible Glory: Custer and the Little Bighorn - the Last Great Battle of the American West. He lives in Dallas, Texas.