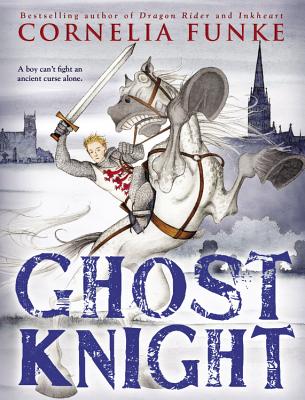 Take one 11-year old boy; one 11-year-old girl, and one ghost and you have the latest by Corneila Funke. Jon Whitcroft is sent to boarding school. A school with history: his father went there and it has ghosts that want to kill him! Only his new friend Emma, her quirky grandmother and a ghost of a Knight atoning for his past, can save him from a truly ghastly fate! Historical, fantastical and humor all rolled into a great package. — Jeanette

“Jon Whitcroft feels abandoned. After being sent to boarding school in Salisbury, Jon thinks that the only things he will have to worry about are fitting in and homesickness. Yet shortly after arriving, he discovers an ancient family curse and four vengeful spirits set on sending him to meet his ancestors. Only with the help of his friend Ella and a noble ghost named William Longspee will Jon be able to survive. Filled with murder, betrayal, lies, loyalty, and, of course, true friendship, this book will satisfy the noble knight in all of us.”
— Gretchen Shuler, Fiction Addiction, Greenville, SC

From international phenomenon Cornelia Funke, the bestselling author of Reckless and Inkheart.

Eleven-year-old Jon Whitcroft never expected to enjoy boarding school. Then again, he never expected to be confronted by a pack of vengeful ghosts, either. And then he meets Ella, a quirky new friend with a taste for adventure...

Together, Jon and Ella must work to uncover the secrets of a centuries-old murder while being haunted by terrifying spirits, their bloodless faces set on revenge. So when Jon summons the ghost of the late knight Longspee for his protection, there's just one question: Can Longspee truly be trusted?

Cornelia Funke is a multiple award-winning German author, best known for writing the Inkworld trilogy as well as The Thief Lord. The Inkworld books, which have won the 2003 Mildred L. Batchelder Award as well as the 2004 and 2006 BookSense Book of the Year Children's Literature Awards, have gained incredible attention and Funke has been dubbed the "German J.K. Rowling." She currently lives in Los Angeles, California.

"Funke's consummate way with setting, well interpreted in Offermann's looming illustrations, brings the medieval English town (and all of its ghosts) to life, from the sprawling boarding school campus to the echoes-of-the-past cathedral and eerie cemetery grounds; a side jaunt to Stonehenge even adds some levity. Appended notes discuss Funke's inspiration for the story and provide history about the real-life people and places."—Horn Book

"Funke follows her foray into YA (Reckless) with a simultaneously creepy and romantic middle-grade ghost story that will please her legions of younger fans. Despite the book's length, the story moves quickly, filled with daring midnight expeditions and close calls with death."—Publisher's Weekly

"Historic details about the real Hartgill, Longspee and Stourton are deftly woven into a ripping good story. It's told with self-effacing humor from the perspective of an awkward boy who emerges as honorable and brave as the ghost knight and the contemporary girl he befriends. Black-and-white illustrations add to the Tudor atmosphere and drama. Sword-swinging ghosts will haunt readers of this droll, harrowing and historically grounded ghost story."—Kirkus