Charles Jessold, Considered as a Murderer: A Novel (Paperback) 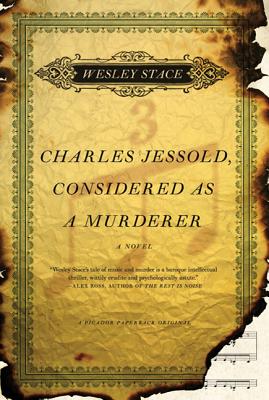 An unreliable narrator vividly evokes the combative world of early 20th century English music, relating a tragedy that parallels an opera by the brilliant Jessold and the life of his 16th century inspiration. A provocative exploration of the relationship between art and life. Stace is the pen name of the musician John Wesley Hardin — Louise Jones

One of The Wall Street Journal's Best fiction books of 2011

England, 1923. A gentleman critic named Leslie Shepherd tells the macabre story of a gifted young composer, Charles Jessold. On the eve of his revolutionary new opera's premiere, Jessold murders his wife and her lover, and then commits suicide in a scenario that strangely echoes the plot of his opera---which Shepherd has helped to write. The opera will never be performed.

Shepherd first shares his police testimony, then recalls his relationship with Jessold in his role as critic, biographer, and friend. And with each retelling of the story, significant new details cast light on the identity of the real victim in Jessold's tragedy.

This ambitiously intricate novel is set against a turbulent moment in music history, when atonal sounds first reverberated through the concert halls of Europe, just as the continent readied itself for war. What if Jessold's opera was not only a betrayal of Shepherd, but of England as well?

Wesley Stace has crafted a dazzling story of counter-melodies and counter-narratives that will keep you guessing to the end.

Wesley Stace is the author of the international bestseller Misfortune, by George, and Charles Jessold, Considered as a Murderer. He has released fifteen albums under the name John Wesley Harding, and he lives in Philadelphia.

“A tremendously imaginative novel that's really several novels in one, for beneath its sparkling surface there are some very murky depths. A wonderfully disquieting read.” —Sarah Waters, author of The Little Stranger

“This is one of the few novels I have read that is truly musical. Wesley Stace is a brilliant and intensely original writer and this is his most unusual book yet.” —Audrey Niffenegger, author of The Time Traveler's Wife

“A gripping narrative that twists and turns to the end...By far the most confident musical fiction I have read in years.” —Norman Lebrecht, New Statesman (UK)

“Wesley Stace's tale of music and murder is a baroque intellectual thriller, wittily erudite and psychologically astute.” —Alex Ross, author of The Rest Is Noise

“We might have predicted that Wesley Stace---a fine novelist and a fine musician---would one day write a novel about music, but could we have predicted that it would be so brilliant? The dialogue sparkles, the prose glimmers, and for once you leave a novel not just haunted by the characters and the story, but humming the tunes.” —Jonathan Coe, author of The Rotters' Club

“Recalls one of the greatest and saddest novels of the period, Ford Madox Ford's The Good Soldier and follows the tradition of great novels of imaginary music.” —Roz Kaveney, The Times Literary Supplement (UK)