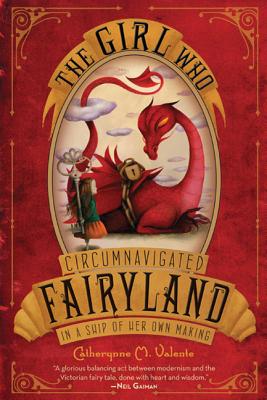 This is book number 1 in the Fairyland series.

This is one of the most magically written fantasy novels I have read in ages! Gorgeous language and beautiful imagery fill every page and leaving you wanting for more. Catherynne Valente has created a world similar to the greats such as Lewis Carroll, Roald Dahl and Gregory Maguire. — Whitney Kaaz

"One of the most extraordinary works of fantasy, for adults or children, published so far this century."—Time magazine, on the Fairyland series

Twelve-year-old September lives in Omaha, and used to have an ordinary life, until her father went to war and her mother went to work. One day, September is met at her kitchen window by a Green Wind (taking the form of a gentleman in a green jacket), who invites her on an adventure, implying that her help is needed in Fairyland. The new Marquess is unpredictable and fickle, and also not much older than September. Only September can retrieve a talisman the Marquess wants from the enchanted woods, and if she doesn't . . . then the Marquess will make life impossible for the inhabitants of Fairyland. September is already making new friends, including a book-loving Wyvern and a mysterious boy named Saturday.

With exquisite illustrations by acclaimed artist Ana Juan, Fairyland lives up to the sensation it created when author Catherynne M. Valente first posted it online. For readers of all ages who love the charm of Alice in Wonderland and the soul of The Golden Compass, here is a reading experience unto itself: unforgettable, and so very beautiful.

The Girl Who Circumnavigated Fairyland in a Ship of Her Own Making is a Publishers Weekly Best Children's Fiction title for 2011.

Catherynne M. Valente is the New York Times bestselling author of over two dozen works of fiction and poetry, including Palimpsest, the Orphan’s Tales series, Deathless, Radiance, and the crowdfunded phenomenon The Girl Who Circumnavigated Fairyland in a Ship of Her Own Making (and the four books that followed it). She is the winner of the Andre Norton, Tiptree, Sturgeon, Eugie Foster Memorial, Mythopoeic, Rhysling, Lambda, Locus, and Hugo awards, as well as the Prix Imaginales. Valente has also been a finalist for the Nebula and World Fantasy Awards. She lives on an island off the coast of Maine with a small but growing menagerie of beasts, some of which are human.

ANA JUAN is a world-renowned illustrator known in the United States for her wonderful covers for The New Yorker magazine, as well as the children's books The Night Eater, and Frida, written by Jonah Winter. She lives in Spain.

“A glorious balancing act between modernism and the Victorian Fairy Tale, done with heart and wisdom.” —Neil Gaiman, Newbery Award–winning author of The Graveyard Book

“A mad, toothsome romp of a fairy tale--full of oddments, whimsy, and joy.” —Holly Black, author of the Spiderwick Chronicles

“When I saw that this book reminds me simultaneously of E. Nesbit, James Thurber, and the late Eva Ibbotson, I don't mean to take anything away from its astonishing originality. It's a charmer from the first page, managing the remarkable parlay of being at once ridiculously funny and surprisingly suspenseful. Catherynne Valente is a find, at any age!” —Peter S. Beagle, author of The Last Unicorn

“This is a kind of The Wonderful Wizard of Oz by way of Alice's Adventures in Wonderland--it's the sort of book one doesn't want to end.” —Publishers Weekly, starred review

“[Fairyland creates] a world as bizarre and enchanting as any Wonderland or Oz and a heroine as curious, resourceful and brave as any Alice or Dorothy. Complex, rich and memorable.” —Kirkus Reviews, starred review

“This book is quite simply a gold mine.” —Booklist, starred review

Girl Who Circumnavigated Fairyland in a Ship of Her Own Making
$7.00
Very Good