The Hour of Peril: The Secret Plot to Murder Lincoln Before the Civil War (Hardcover) 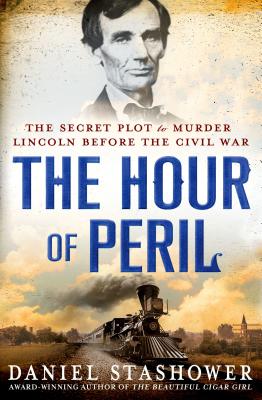 By Daniel Stashower
$26.99
Hard to Find - May no longer be available

The last city on Lincoln's 1,900-mile journey to Washington after his 1861 election was Baltimore, a hotbed of secessionist fervor. Here is a tense, day-by-day examination of an elaborate plot to assassinate the president-elect. — Alden Graves

"It's history that reads like a race-against-the-clock thriller." "Harlan Coben"

Daniel Stashower, the two-time Edgar award winning author of "The Beautiful Cigar Girl," uncovers the riveting true story of the "Baltimore Plot," an audacious conspiracy to assassinate Abraham Lincoln on the eve of the Civil War in THE HOUR OF PERIL.

In February of 1861, just days before he assumed the presidency, Abraham Lincoln faced a "clear and fully-matured" threat of assassination as he traveled by train from Springfield to Washington for his inauguration. Over a period of thirteen days the legendary detective Allan Pinkerton worked feverishly to detect and thwart the plot, assisted by a captivating young widow named Kate Warne, America's first female private eye.

As Lincoln's train rolled inexorably toward "the seat of danger," Pinkerton struggled to unravel the ever-changing details of the murder plot, even as he contended with the intractability of Lincoln and his advisors, who refused to believe that the danger was real. With time running out Pinkerton took a desperate gamble, staking Lincoln's life and the future of the nation on a "perilous feint" that seemed to offer the only chance that Lincoln would survive to become president. Shrouded in secrecy and, later, mired in controversy the story of the "Baltimore Plot" is one of the great untold tales of the Civil War era, and Stashower has crafted this spellbinding historical narrative with the pace and urgency of a race-against-the-clock thriller.
A "Washington Post "Notable Nonfiction Book of 2013
Winner of the 2014 Edgar Award for Best Fact Crime
Winner of the 2013 Agatha Award for Best Nonfiction
Winner of the 2014 Anthony Award for Best Critical or Non-fiction Work
Winner of the 2014 Macavity Award for Best Nonfiction.

DANIEL STASHOWER is an acclaimed biographer and narrative historian and winner of the Edgar, Agatha, and Anthony awards, and the Raymond Chandler Fulbright Fellowship in Detective Fiction. His work has appeared in "The New York Times," "The Washington Post," "Smithsonian Magazine," "AARP: The Magazine," and "National Geographic Traveler" as well as other publications.

“This account of the little-known Baltimore-based plot to assassinate Lincoln… hurtles across a landscape of conspirators, heroes and politicos in hotel suites, ladies’ parlors and railway depots…. We can be grateful that Old Abe survived the first attempt on his life. And now we have the chance to relish the story of the clever and determined characters who were dedicated to his safety.” —New York Times Book Review

“The world's most famous private eye saves Abraham Lincoln's life—and perhaps the Union itself?  Sounds like fiction, but in Daniel Stashower's riveting new book, it's all true.  It's history that reads like a race-against-the-clock thriller.” —Harlan Coben

“Reads like a first-class detective novel . . . Pinkerton's tireless energy prevented a tragedy that might have destroyed the republic.” —James M. McPherson, Pulitzer Prize–winning author of Battle Cry of Freedom