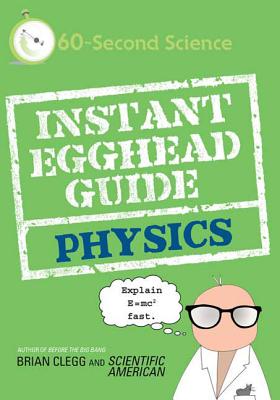 Scientific American's daily Sixty-Second Science podcast was such an unexpected success, with millions of downloads, that a spin-off site was created around the concept of bite-sized science. This new series of books will tackle the biggest topics in science by breaking them up into quick and easy two- to four-page spreads. Topics in each book will take the light and accessible tone of the 60-Second Science podcasts and blog. INSTANT EGGHEAD PHYSICS will explore quantum physics, relativity, and light. It will break down complex ideas and explore why Einstein made some big blunders, how the ipod came to be, and what it would take to make teleportation possible.

BRIAN CLEGG is the author of Ten Billion Tomorrows, Final Frontier, Extra Sensory, Gravity, How to Build a Time Machine, Armageddon Science, Before the Big Bang, Upgrade Me, and The God Effect among others. He holds a physics degree from Cambridge and has written regular columns, features, and reviews for numerous magazines. He lives in Wiltshire, England, with his wife and two children.

Scientific American is the award-winning authoritative source for the science discoveries and technology innovations that matter.