Dreyfus: Politics, Emotion, and the Scandal of the Century (Paperback) 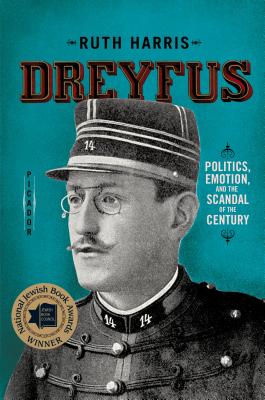 In 1894, Alfred Dreyfus, a Jewish officer in the French army, was wrongfully convicted of being a spy for Germany and was imprisoned on Devil's Island. Oxford historian Ruth Harris presents the scandal of the century in all its human complexity. Drawing on private letters and thousands of previously unconsidered sources, Harris offers a definitive account of the tragic drama that divided French society and stunned the world. Sweeping and engaging, Harris's retelling of the Dreyfus Affair extricates it from the myths of both the left and the right, offering a new understanding of one of the most significant episodes in modern history.

Ruth Harris is the author of Lourdes: Body and Spirit in the Secular Age. A fellow and tutor at Oxford University, she has written widely on topics in French history, cultural history, women’s history, and the history of medicine. She lives in Oxford, England.

“It is the goal of the Oxford historian Ruth Harris to extricate the Dreyfus Affair from the myths it has generated, on both the left and the right, and to trace its tortuous evolution from 1894 to 1906 in all of its human complexity. Combining an even-tempered tone with generosity of imagination, she has achieved that goal… Harris's excellent Dreyfus deserves a wide audience for its patient, fair-minded exploration of human ideals, delusions, prejudices, hatreds and follies.” —Leo Damrosch, The New York Times Book Review

“Scrupulous and well-written… Ruth Harris's rather beautiful and complex study is a conscious attempt to add, or better say restore, the layers of ambiguity that are lost if we accept the almost classical model of confrontation between darkness and enlightenment. It's not that she is, in any usual sense, a revisionist. Indeed, her restatement of the essential and unarguable point--the complete innocence of Captain Alfred Dreyfus--could scarcely be bettered… In some ways, then, Harris's narrative actually enhances the traditional picture of good triumphing over injustice, with the French secular left wearing the white hat. But she expertly identifies the exceptions.… Harris is to be thanked for the care and measure of her sifting and weighing, and for the deep historical perspective that she brings to the undertaking.” —Christopher Hitchens, The Weekly Standard

“An extraordinary study of the affair as a tragic drama that swept up a man, his family and friends, and more widely French society and the French state… The strength of Ruth Harris's book is to present the Dreyfus Affair as a human and social drama. Whereas many accounts concentrate on the conspiratorial and public dimensions of the debate, Harris--who has read thousands of the private letters of those involved--moves easily between the public and the private, the intellectual and the emotional… She demonstrates that the Dreyfusards were not all apostles of the Enlightenment; neither were all anti-Dreyfusards benighted traditionalists.” —Robert Gildea, The New York Review of Books

“Harris has uncovered a wealth of new documents, and she tells her story to satisfy those with an appetite for rich historical detail.… Simple dichotomies make for dangerous politics and for dubious histories. This balanced and thoughtful account of Dreyfus is a compelling reminder of the complexity and pathos of the past.” —Michael S. Roth, The San Francisco Chronicle

“Ruth Harris's meticulous, assured, and engrossing account of the Dreyfus Affair calls to mind none of the many books on the subject… Harris has produced a history sensitive to historical limits. She unravels decisions made in the swirl of experience, fraught with contradiction, accident, and incoherence and governed by emotion as much as reason, by prejudice as much as principle.… Harris's eye for the vivid detail gracefully complements her analytical rigor and is one reason her book is a pleasure to read.” —John Palattella, The Nation

“Excellent… A thorough work of scholarship with a firm sense of its own place in the historiography… A carefully crafted intellectual history of fin-de-siècle France that explores at length the biographies and feuds of dozens of Dreyfusards and anti-Dreyfusards. All of Harris's investigations are thoughtful and beautifully written.” —Michael O'Donnell, Washington Monthly

“Longer works about Dreyfus have been written, but I can't imagine one better... The cast rivals War and Peace, and Harris tells who they were, what shaped their views and their roles in the affair. These interesting accounts enormously deepen our understanding.” —Neal Gendler, The Jewish Chronicle

“Illuminating… Harris paints well the complex lives created by Dreyfus's condemnation, and offers a richly textured account of the dramatis personae--not only in the Dreyfusard camp, but anti-Dreyfusards as well.… One of Harris' main accomplishments in her rich and nuanced book is restoring a face to Alfred Dreyfus himself. He has never seemed the adequate hero for such an epic struggle.… In detailing Dreyfus's family life--especially his close relation with his intrepid and forceful wife, Lucie--and his unwavering commitment to the army and its values, his firm if rigid sense of the honorable course of action, she makes him more understandable than most previous historians.” —Peter Brooks, Truthdig

“A most comprehensive and nuanced account of the participants on both sides of the imbroglio, rich with information… Harris is a first-rate narrative historian... What marks Harris's contribution is her formidable research skills, her exceptionally wide general and historical reading, and her always interesting eye for the revealing anecdote or pen portrait.” —Carmen Callil, The Guardian (UK)

“In many respects, the Dreyfus Affair remains the founding event of modern politics. Ruth Harris's insightful and fascinating study brings the debate, which riveted France and the world for over ten years, back to life. With an ethnographer's attention for the salient detail, time and again Harris reveals aspects of the Affair that her predecessors, among both ideological camps, have inexplicably overlooked. She achieves all of this with a mellifluous prose style and an accomplished novelist's sense of narrative framing. Her book on the Affair is destined to become the standard work for years to come.” —Richard Wolin, author of The Wind from the East: French Intellectuals, the Cultural Revolution, and the Legacy of the 1960s

“Ruth Harris's new book on the Dreyfus Affair tells the story colorfully and with admirable completeness, while revealing new dimensions that both complicate and enrich our understanding of what drew people to involve themselves with it. Her sensitivity to the personal motives at work on both sides and to the sometimes surprising features of religious and secular culture of the time makes what has long been recognized as a moment full of passion and significant conflict still more engrossing.” —Jerrold Seigel, author of The Idea of the Self: Thought and Experience in Europe since the Seventeenth Century

“Ruth Harris is one of the most thoughtful and original historians writing in English today. In her hands, the Dreyfus Affair escapes the century-old interpretation of its protagonists to reveal the humanity of Alfred Dreyfus, who disappointed his supporters, and the courage of his wife, Lucie, whom they largely ignored. By the end, we realize that because pro- and anti-Dreyfusards inhabited the same cultural universe, they weren't as far apart as many historians have believed. Dreyfus's proponents were right, of course, but for reasons more emotionally and politically complex than we have known until now.” —Edward Berenson, author of The Trial of Madame Caillaux