The Brooklyn Follies: A Novel (Paperback) 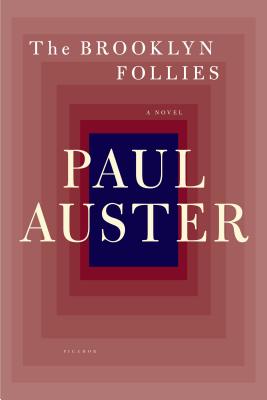 An elderly man estranged from his family goes to Brooklyn to die in blissful anonymity. While there he runs into his nephew, who he hasn't seen in many years. Much to his dismay, he comes to learn that his nephew is in even worse shape than himself and could use some love. The two embark on a screwball adventure guided by dreams, hope, and desperation and discover that there is a lot more to life than either had previously thought. — Josh Cohen-Peyton

Nathan Glass has come to Brooklyn to die. Divorced, retired, estranged from his only daughter, the former life insurance salesman seeks only solitude and anonymity. Then Glass encounters his long-lost nephew, Tom Wood, who is working in a local bookstore. Through Tom and his charismatic boss, Harry, Nathan's world gradually broadens to include a new set of acquaintances, which leads him to a reckoning with his past.

Paul Auster is the bestselling author of 4 3 2 1, Sunset Park, Invisible, The Book of Illusions, and the New York Trilogy, among many other works. In 2006 he was awarded the Prince of Asturias Prize for Literature. Among his other honors are the Prix Médicis étranger for Leviathan, the Independent Spirit Award for the screenplay of Smoke, and the Premio Napoli for Sunset Park. In 2012, he was the first recipient of the NYC Literary Honors in the category of fiction. He has also been a finalist for the International IMPAC Dublin Literary Award (The Book of Illusions), the PEN/Faulkner Award (The Music of Chance), the Edgar Award (City of Glass), and the Man Booker Prize (4 3 2 1). He is a member of the American Academy of Arts and Letters and a Commandeur de l’Ordre des Arts et des Lettres. His work has been translated into more than forty languages. He lives in Brooklyn, New York.

“A charming, beguiling story about the terrible beauty of families and the redemptive power of love . . . Auster's writing is packed with surprises.” —USA Today

“Probably the first authentic attempt to deal with the post--September 11 world . . . It is a multilayered tapestry, with whimsical chapter headings and Dickensian depth.” —San Francisco Chronicle

“Auster has written a sublime soap opera about the ways in which people abandon and save one another. He captures a historical moment, our twisted America, and he offers a message of hope. Love will save us. We will save each other. Auster employs tough-guy talk and funny, believable stories of folly in his search for wisdom and goodness.” —The Boston Globe