Lamentations of the Father: Essays (Paperback) 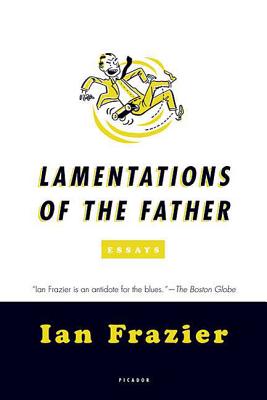 By Ian Frazier
Call or email to see if a used copy is available.
Hard to Find - May no longer be available

This little essay by the peerless Frazier is very, very, VERY funny. His imitation of the Old Testament vernacular is dead-on. Even before I'd begat a son, I thought this was the funniest thing I had ever read. ~ Reviewed by Stan Hynds

— From Lamentations of the Father

Ian Frazier is unquestionably one of America's greatest living humorists, a writer with a distinct, generous sensibility and a thousand different voices. His work is hilarious, elegant, and piercing, drawing on high and low cultureto expose the warped line of thought running beneath our public selves. When "The Atlantic Monthly "published four humorists among the best writing ever to appear in the magazine, they chose essays by Mark Twain, James Thurber, Kurt Vonnegut, and Ian Frazier's "Lamentations of the Father." This collection, gathered from the past fourteen years of his career, once again proves him worthy of that great company.

IAN FRAZIER is the author of nine books. A frequent contributor to The New Yorker, he lives in Montclair, New Jersey.

"Ian Frazier is an antidote for the blues."--The Boston Globe

"Being a funny guy doesn't always mesh with being a smart guy. In Frazier's case, however, the two seem one and the same."--The Christian Science Monitor

"Warning . . . reading [Frazier's essays] in the bathroom, on the subway, or in other heavy-traffic areas may force you to have to explain to others what's making you guffaw so loudly."--Entertainment Weekly

"Frazier is a master of the trade and for those cursed with literacy, an absolute howl."--The Buffalo News

"Hilarious . . . [Frazier's] sense of humor is so uncanny and surprising it’s nearly impossible not to be charmed. Highly entertaining."--Kirkus Reviews