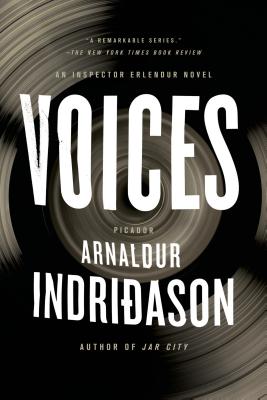 This is book number 3 in the An Inspector Erlendur Series series.

Award-winning Icelandic author Arnaldur Indridason's latest thriller, Voices again features Inspector Erlendur Sveinsson in a dark tale set in Reykjavik. A hotel Santa is murdered in the middle of the Christmas season. The hotel is full of suspects. As the investigation proceeds a haunting secret from the murdered Santa's past is revealed. Interwoven with the investigation is the plight of Sveinsson's troubled daughter. Another compelling novel from the author of Jar City and Silence of the Game. — Sarah Knight

The Christmas rush is at its peak in a grand Reykjavík hotel when Inspector Erlendur is called in to investigate a murder. The hotel Santa has been stabbed to death, and Erlendur and his fellow detectives find no shortage of suspects between the hotel staff and the international travelers staying for the holidays. As Christmas Day approaches, Erlendur must deal with his difficult daughter, pursue a possible romantic interest, and untangle a long-buried web of malice and greed to find the murderer. Voices is a brutal, soulful noir from the chilly shores of Iceland.

“Indridason expertly plies the more familiar waters of the classic mystery. . . . He is a wise, compassionate writer, and this is his wisest, most compassionate book.” —Star Tribune (Minneapolis)

“The enthusiasm generated by Indridason's first two novels starring Reykjavík police inspector Erlendur Sveinsson was reminiscent of the buzz that launched Henning Mankeel's Kurt Wallander when he arrived in the United States a decade ago. The third in Indridason's series will add more volume to the word of mouth. . . . A grim but compelling look at how the stranglehold of the past cripples our abilitiy to live in the present.” —Booklist