The Street of a Thousand Blossoms: A Novel (Paperback) 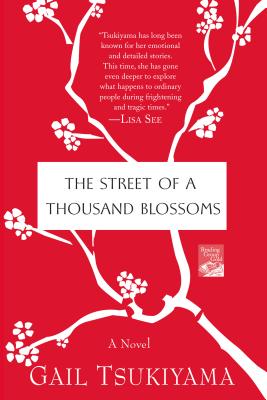 Gail Tsukiyama's The Street of a Thousand Blossoms is a powerfully moving masterpiece about tradition and change, loss and renewal, and love and family from a glorious storyteller at the height of her powers.

It is Tokyo in 1939. On the Street of a Thousand Blossoms, two orphaned brothers dream of a future firmly rooted in tradition. The older boy, Hiroshi, shows early signs of promise at the national obsession of sumo wrestling, while Kenji is fascinated by the art of Noh theater masks.

But as the ripples of war spread to their quiet neighborhood, the brothers must put their dreams on hold—and forge their own paths in a new Japan. Meanwhile, the two young daughters of a renowned sumo master find their lives increasingly intertwined with the fortunes of their father's star pupil, Hiroshi.

Born to a Chinese mother and a Japanese father in San Francisco, Gail Tsukiyama now lives in El Cerrito, California. Her novels include Dreaming Water, The Language of Threads, The Samurai's Garden, and Night of Many Dreams.

“Tsukiyama has long been known for her emotional and detailed stories. This time, she has gone even deeper to explore what happens to ordinary people during frightening and tragic times.” —Lisa See

“A fascinating, intricate portrait of Japanese customs and rituals that ?oods the senses.” —USA Today

“Tsukiyama has the soul of a storyteller.” —The Denver Post

“A sweeping saga if ever there was one. . . . The spirit triumphant---whether of individuals or of nations---makes for an eternally rewarding theme.” —The Washington Post Book World

“[Tsukiyama's] Zen-like telling of the brothers' dramatic stories infuses this poignant tale with the essence of Japan.” —Elle magazine

“A writer of astonishing grace, delicacy, and feeling.” —Michael Chabon, author of The Amazing Adventures of Kavalier & Clay