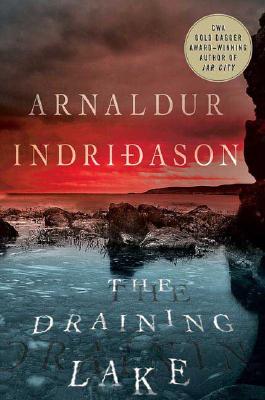 In The Draining Lake a skeleton from the 1970s emerges near Reykjavik, attached to a Russian Cold War listening device. The past is as important as the present in Detective Erlendur Sveinsson's investigation. — Louise Jones

“As the waters of Lake Kleifarvatn mysteriously drain, a skeleton is exposed, and Erlendur Sveinsson, dedicated to the point of obsession to finding missing persons, is called in to try to identify the remains. An intricate and satisfying mystery and thriller set against the backgrounds of modern Reykjavik and Cold War-era Leipzig.”
— Allen Moore, City Lights Bookstore, Sylva, NC

An international sensation, published in over twenty five countries around the world, Arnaldur Indridason attained instant fame in the English-speaking mystery world after winning the Gold Dagger Award for Silence of the Grave. His other crime novels in the series, Jar City and Voices, have also been published to highest acclaim—U.S. readers who have already discovered this extraordinary writer are eagerly anticipating this latest Inspector Erlendur Sveinsson thriller.

Following an earthquake, the water level of an Icelandic lake suddenly falls, revealing a skeleton that is weighed down by a heavy radio device bearing inscriptions in Russian. Inspectors Erlendur, Elinborg, and Sigurdur Oli’s investigation takes them back to the Cold War era, when bright, left-wing students in Iceland were sent to study in the “heavenly state” of Communist East Germany.

But one of the students went missing, and her friends suspected that her “heavenly state” was all too real. Erlendur follows a long cold trail that leads back to Iceland, international espionage, and murder.

Another astonishing Reykjavík thriller from one of crime fiction’s brightest stars, The Draining Lake is Arnaldur Indridason’s most gripping book yet.

Arnaldur Indridason, author of the Reykjavik Thrillers, was born in 1961. He worked at an Icelandic newspaper, first as a journalist and then for many years as a film reviewer. He won the Glass Key Award for Best Nordic Crime Novel for both "Jar City" and "Silence of the Grave," and in 2005 "Silence of the Grave" also won the Crime Writers Gold Dagger Award for best crime novel of the year. The film of Jar City (available on DVD) was Iceland's entry for the 2008 Academy Award for Best Foreign Film. Indridason lives in Reykjavik with his family.

“The best new series I’ve read this year. Arnaldur Indridason is already an international literary phenom---and it's easy to see why. His novels are gripping, authentic, haunting and lyrical. I can't wait for the next.”
- Harlan Coben on Silence of the Grave

“Arnaldur Indridason is a writer of astonishing gravitas and talent.”
- John Lescroart on Jar City

"A book as subtle and moving as it is suspenseful."
- Wall Street Journal on The Draining Lake

“A commanding new voice . . . puts Iceland on the map as a major destination for enthusiasts of Nordic crime fiction.”
- Marilyn Stasio, The New York Times Book Review on Silence of the Grave

“Excellent . . . compelling . . . the denouement of this astonishingly vivid and subtle novel is unexpected and immensely satisfying.”
- Publishers Weekly (starred review) on Silence of the Grave

"A must-visit locale for mystery fans."
- St. Louis Post-Dispatch on The Draining Lake

“Classic mystery fiction, both compassionate and thrilling. Indridason is one of the brightest stars in the the genre's dark skies.”
- John Connolly on Jar City

“Remarkable . . . another top-notch story from Indridason, its lyrical melancholy matched by the depth of its characterizations.”
- Kirkus Reviews (starred review) on Voices

“Every one of these writers is good [Hakan Nesser, Kjell Eriksson, Ake Edwardson, Helene Tursten, Karin Fossum], but in my book, Arnaldur Indridason is even better.”
- Joe Queenan, Los Angeles Times

“Dark, haunting . . . touched me in a way that few mystery novels do.”
- Hallie Ephron, The Boston Globe on Jar City

“A wonderfully storyteller. It's impossible to put the book down once you begin reading.”
- The Globe and Mail on Voices

"An undiluted pleasure. This series places Indridason at the center of the best of contemporary crime fiction. He is a master storyteller, and has a real gift for evoking complex humanity."
- The Guardian on The Draining Lake

“Fans of mystery in general and Henning Mankell and Karin Fossum can only exult.”
- Library Journal (starred review) on Jar City

“Indridason has definitely vaulted onto the A-list of Scandinavian crime authors.”
- Booklist on Silence of the Grave