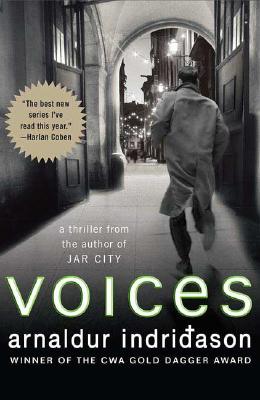 Award-winning Icelandic author Arnaldur Indridason's latest thriller, Voices again features Inspector Erlendur Sveinsson in a dark tale set in Reykjavik. A hotel Santa is murdered in the middle of the Christmas season. The hotel is full of suspects. As the investigation proceeds a haunting secret from the murdered Santa's past is revealed. Interwoven with the investigation is the plight of Sveinsson's troubled daughter. Another compelling novel from the author of Jar City and Silence of the Game. — Sarah Knight

The Christmas rush is at its peak in a grand Reykjavík hotel when Inspector Erlendur Sveinsson is called in to investigate a murder. The hotel Santa has been stabbed, and Erlendur and his detective colleagues have no shortage of suspects between hotel staff and the international travelers staying for the holidays.

But then a shocking secret surfaces. As Christmas Day approaches, Erlendur must deal with his difficult daughter, pursue a possible romantic interest, and untangle a long-buried web of malice and greed to find the murderer.

One of Indridason's most accomplished works to date, Voices is sure to win him a multitude of new American suspense fans.

“The best new series I’ve read this year.”
---Harlan Coben "Another top-notch mystery from Indridason, its lyrical melancholy matched by the depth of its characterizations."---Kirkus Reviews (starred review) on Voices  “A writer of astonishing gravitas and talent.”
---John Lescroart, author of The Suspect, on Jar City

“Classic mystery fiction, both compassionate and thrilling. Indridason is about to become one of the brightest stars in the genre’s dark skies.”
---John Connolly, author of The Unquiet, on Jar City

“One of the modern masters of the police procedural. Voices is replete with wonderfully flawed characters . . . and insight that at times makes you want to weep. I cannot recommend it highly enough.”
---January Magazine

“Excellent . . . compelling . . . the denouement of this astonishingly vivid and subtle novel is unexpected and immensely satisfying.”
---Publishers Weekly (starred review) on Silence of the Grave

“A commanding new voice . . . puts Iceland on the map as a major destination for enthusiasts of Nordic crime fiction.”
---Marilyn Stasio, The New York Times Book Review on Silence of the Grave “A wonderful storyteller. . . . It’s impossible to put the book down once you begin reading.”
---The Globe and Mail (Canada) on Voices

“Fans of mystery in general and Henning Mankell and Karin Fossum can only exult.”
---Library Journal (starred review) on Jar City