Silence of the Grave: An Inspector Erlendur Novel (Hardcover) 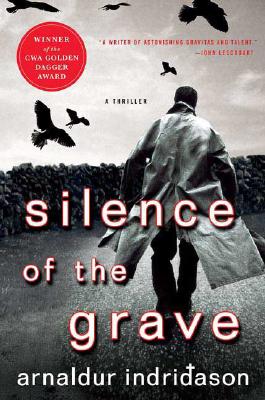 Inspector Erlendur, from the critically Jar City, investigates the decades old murder of a body found in a Reykjavik, Iceland construction site. He's also estranged from his troubled daughter and must come to terms with a haunting tragedy from his childhood. Juxtaposed is the story of a woman, her three children and abusive husband who lived in a house on the construction site many years ago. Whose body is buried there? The solution to the mystery and evaluation of Erlendur's personal life make an entertaining read.

Last year Jar City introduced international crime-writing sensation Arnaldur Indridason to rave reviews and a rousing welcome from American thriller fans. And now, Silence of the Grave, the next in this stunning series has won the coveted Golden Dagger Award. Presented by the British Crime Writers' Association, previous winners of this award include John Le Carre, Minette Walters, Henning Mankell, and James Lee Burke.
In Silence of the Grave, a corpse is found on a hill outside the city of Reykjavík, and Detective Inspector Erlendur Sveinsson and his team think the body may have been buried for some years.
While Erlendur struggles to hold together the crumbling fragments of his own family, slowly but surely he finds out the truth about another unhappy family. Few people are still alive who can tell the tale, but even secrets taken to the grave cannot remain hidden forever.
Destined to be a classic in the world of crime fiction, Silence of the Grave is one of the most accomplished thrillers in recent years.

Arnaldur Indridason was born in 1961. He worked at an Icelandic newspaper, first as a journalist and then for many years as a film reviewer. He won the Glass Key Award for Best Nordic Crime Novel for both "Jar City" and "Silence of the Grave," and in 2005 "Silence of the Grave" also won the Golden Dagger Award. Indridason lives in Reykjavik, Iceland, and he and J.K. Rowling are the only authors to simultaneously hold the top three spots on the Icelandic bestseller list. His next novel in the series is forthcoming soon from Thomas Dunne Books/St. Martin's Minotaur."