Fourth Uncle in the Mountain: The Remarkable Legacy of a Buddhist Itinerant Doctor in Vietnam (Paperback) 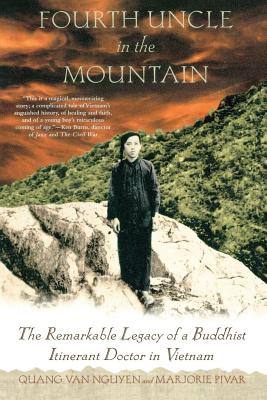 UNBELIEVABLE unless you know Quang, as I do. There are things in his life - black magic, a spiritual master hundreds of years old,a preternatural knowledge of herbal medicines and healing - that confound the Western mind. He tells his tragic story as a young Zen abbot in Vietnam during the darkest times of the Vietnam War. Quang eventually escaped the Viet Cong, finding refuge in Vermont, HIGHEST RECOMMENDATION — Efton Jiles

This book reads like mystery, adventure, and science fiction. Born in 1950, son of a revered traditional healer, Quang was schooled in ancient Chinese and Vietnamese herbal medicine and magic. He spent three years sequestered in a cave deep in a forbidden mountain, taught by an ageless master who was present in his body only occasionally, Later, as a Buddhist monk and abbot, Quang was able to save many lives during the Vietnam Civil War - was a prisoner of the VietCong forced to create pharmaceuticals. He escaped and eventually found his way to Vermont, where he currently practices herbal healing. — Efton Jiles

Fourth Uncle in the Mountain is an odyssey of a single-father folk hero and his foundling son in a land ravaged by the atrocities of war. It is a classic story complete with humor, tragedy, and insight, from a country where ghosts and magic are real.

Set during the French and American wars in South Vietnam, Fourth Uncle in the Mountain is the true story of an orphan, Quang Van Nguyen, adopted by a sixty-four-year-old monk, Thau Van Nguyen

Thau carries great responsibility for his people as a barefoot doctor. Wanted by the French regime, he must occasionally must flee in to the jungle, where he is perfectly at home living among the animals. As wise and resourceful as Thau is, he meets his match in his mischievous son. Quang is more interested in learning Cambodian sorcery and martial arts than in developing his skills and wisdom according to his father's plan.

Nevertheless, Thau manages against all odds to raise his son to follow in his footsteps and in doing so saves him, as well as a part of Vietnam's esoteric knowledge, from the Vietnam holocaust.

Marjorie Pivar has worked for the past twenty years as a Shiatsu therapist in the field of alternative medicine. She lives in Vermont.

Quang Van Nguyen is the son of one of South Vietnam’s most beloved spiritual masters, Thau Van Nguyen. Quang became a Buddhist abbot before fleeing Vietnam in 1987. He now lives in the United States.

“[A] charming book . . . the volume contains a wealth of information about Vietnamese history and culture … an adventure book strung through with passages on selflessness and mindfulness, this volume is an excellent choice for readers interested in Vietnam and Buddhism.” —Publishers Weekly

“This is a magical, mesmerizing story; a complicated tale of Vietnam's anguished history, of healing and faith, and of a young boy's miraculous coming of age.” —Ken Burns, director of Jazz and The Civil War

“When I had read the first few chapters of this engrossing biography, I had stopped a dozen times to recall my times in the Delta and the towns and villages that are mentioned in the book. By the time I had finished – I wanted to go back…. A thoroughly enjoyable read.” —Captain E.G. Adams, The Air America Log

“Fourth Uncle in the Mountain is a great story about two simply good men. It is told simply, but simplicity should never be mistaken for a lack of emotional complexity, intellectual refinement, or overwhelming humanity. It is all that.” —The Asian Reporter

“…an unputdownable tale, told in an intimate, oral style with an unassuming wisdom, a thrilling, Castaneda-like search for knowledge as well as a moving tribute to the most profound love between a father and son.” —Nick DeMartino, University Bookstore, Seattle (selected as University Bookstore's 2004 Book of the Year)