What We Talk about (Lib)(CD) (Compact Disc) 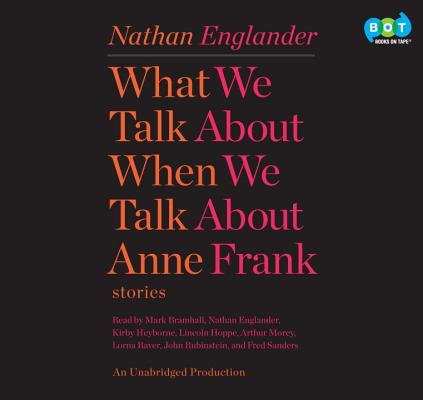 Englander is an extremely gifted writer. The first story is a stunner. — Stan Hynds

“Ranging from historical and autobiographical fiction to modern tall tales, Englander's stories are written with a ferocious, startling energy. They also pose difficult questions--dilemmas requiring Solomonic wisdom to resolve--and they don't let anyone off the hook. Above all, Englander is after the truth, and he takes notions of transparency to ends both logical and absurd to make his characters--and his readers--bare their souls and see what's there. This is powerful fiction that will haunt you after you close the book.”
— Laurie Greer, Politics & Prose Books and Coffee Shop, Washington, DC

These eight new stories from the celebrated novelist and short-story writer Nathan Englander display a gifted young author grappling with the great questions of modern life, with a command of language and the imagination that place Englander at the very forefront of contemporary American fiction.
The title story, inspired by Raymond Carver's masterpiece, is a provocative portrait of two marriages in which the Holocaust is played out as a devastating parlor game. In the outlandishly dark Camp Sundown vigilante justice is undertaken by a group of geriatric campers in a bucolic summer enclave. Free Fruit for Young Widows is a small, sharp study in evil, lovingly told by a father to a son. Sister Hills chronicles the history of Israel's settlements from the eve of the Yom Kippur War through the present, a political fable constructed around the tale of two mothers who strike a terrible bargain to save a child. Marking a return to two of Englander's classic themes, Peep Show and How We Avenged the Blums wrestle with sexual longing and ingenuity in the face of adversity and peril. And Everything I Know About My Family on My Mother's Side is suffused with an intimacy and tenderness that break new ground for a writer who seems constantly to be expanding the parameters of what he can achieve in the short form.
Beautiful and courageous, funny and achingly sad, Englander's work is a revelation.

Nathan Englander s short fiction has appeared in "The New Yorker, The Atlantic, "and numerous anthologies, including "The Best American Short Stories "and "The O. Henry Prize Stories. "Englander is the author" "of the novel "The Ministry of Special Cases "and the story collection "For the Relief of Unbearable Urges, "which earned him a PEN/Malamud Award and the Sue Kaufman Prize for First Fiction from the American Academy of Arts and Letters. He lives in Brooklyn, New York."