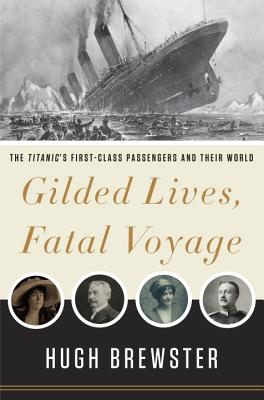 By Hugh Brewster
$26.00
Hard to Find - May no longer be available

"Gilded Lives, Fatal Voyage" takes us behind the paneled doors of the "Titanic"'s elegant private suites to present compelling, memorable portraits of her most notable passengers. The intimate atmosphere onboard history's most famous ship is recreated as never before.
The "Titanic" has often been called an exquisite microcosm of the Edwardian era, but until now, her story has not been presented as such. In "Gilded Lives, Fatal Voyage," historian Hugh Brewster seamlessly interweaves personal narratives of the lost liner's most fascinating people with a haunting account of the fateful maiden crossing. Employing scrupulous research and featuring 100 rarely-seen photographs, he accurately depicts the ship's brief life and tragic denouement, presenting the very latest thinking on everything from when and how the lifeboats were loaded to the last tune played by the orchestra. Yet here too is a convincing evocation of the table talk at the famous Widener dinner party held in the Ritz Restaurant on the last night. And here we also experience the rustle of elegant undergarments as first-class ladies proceed down the grand staircase in their soigne evening gowns, some of them designed by Lady Duff Gordon, the celebrated couteriere, who was also on board.
Another well-known passenger was the artist Frank Millet, who led an astonishing life that seemed to encapsulate America's Gilded Age from serving as a drummer boy in the Civil War to being the man who made Chicago's White City white for the 1893 World Exposition. His traveling companion Major Archibald Butt was President Taft's closest aide and was returning home for a grueling fall election campaign that his boss was expected to lose. Today, both of these once-famous men are almost forgotten, but their ship-mate Margaret Tobin Brown lives on as the Unsinkable Molly Brown, a name that she was never called during her lifetime.
Millionaires John Jacob Astor and Benjamin Guggenheim, writer Helen Churchill Candee, movie actress Dorothy Gibson, aristocrat Noelle, the Countess of Rothes, and a host of other travelers on this fateful crossing are also vividly brought to life within these pages. Through them, we gain insight into the arts, politics, culture, and sexual mores of a world both distant and near to our own. And with them, we gather on the "Titanic"'s sloping deck on that cold, starlit night and observe their all-too-human reactions as the disaster unfolds. More than ever, we ask ourselves, What would "we" have done?

Hugh Brewster has twenty-five years of experience in creating books about the "Titanic" as an editor, publisher, and writer. He worked with Robert D. Ballard to produce the 1987 international bestseller "The Discovery of the Titanic" and oversaw the creation of "Titanic: An Illustrated History," a book that provided inspiration for James Cameron s epic movie. Brewster is also the author of "Inside the Titanic, 882 1/2 Amazing Answers to All Your Questions About the Titanic," " "and "Deadly Voyage" and has written twelve award-winning books for young readers, including "Carnation, Lily, Lily, Rose," which was chosen as one of the best books of 2007 by the "Washington Post." He lives in Toronto."

“Brewster’s nuanced account introduces us to a plutocracy frolicking in the sunset of England’s Edwardian era and America’s Gilded Age.  He pushes past stereotypes to vividly describe the elite realm on deck”
– New York Times Book Review

“You needn’t be an avid Titanic scholar or enthusiast to find this story spellbinding.  No fiction author could ever concoct a tale of greater tragedy, irony, pathos, ‘what ifs’ and ‘if onlys,’ heroism, cowardice, wealth and poverty.”
– Fredericksburg Free Lance-Star

“[A] brilliant account of the first-class passengers who went down with the ship, giving us a glimpse into a Gilded Age about to disappear forever….Brewster's method is simple and highly entertaining.”
-- Minneapolis Star-Tribune

“This is one of those rare books on the subject that provides information both new and relevant, in a scholarly but readable way. Highly recommended to anyone interested in the social history of the early 20th century.”
– Library Journal (starred review)

“Full of delicious details, from champagne flutes to the careless luxe of furs and satin, this is a spell-binding story, fresh, original and totally absorbing.”
--Marian Fowler, author of In a Gilded Cage

“Focuses on an area of the disaster that has long been overlooked ––that of the prominent people who were involved....a compelling account of who they were and how this select group of names came together in one enormous tragedy.”
–Don Lynch, author of Titanic: An Illustrated History and Ghosts of the Abyss