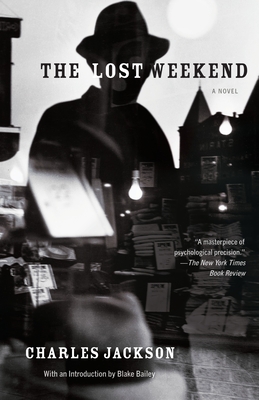 The unheralded Jackson saw most of his life through the bottom of a shot glass, and his prose reads like F. Scott Fitzgerald dictating from the floor of McShorley's Tavern. His 1944 masterpiece is an unflinching account of alcoholism as both disease and the ultimate form of rebellion. It's a hardboiled depiction of the Great American Loser, the missing link between The Great Gatsby and On the Road. — Charles Bottomley

It is 1936, and on the East Side of Manhattan, a would-be writer named Don Birnam decides to have a drink. And then another, and then another, until he’s in the midst of what becomes a five-day binge. The Lost Weekend moves with unstoppable speed, propelled by a heartbreaking but unflinching truth. It catapulted Charles Jackson to fame, and endures as an acute study of the ravages of alcoholism, as well as an unforgettable parable of the condition of the modern man.

Charles Jackson was born in 1903 and raised in the township of Arcadia, New York, in the Finger Lakes region, where much of his fiction is set. After a youth marred by tuberculosis and alcoholism, Jackson achieved international fame with his first novel, The Lost Weekend (1944), which was adapted into a classic movie by Billy Wilder and Charles Brackett. Over the next nine years, Jackson published two more novels and two story collections, while continuing to struggle with alcohol and drug addiction. In 1967, after a fourteen-year silence, he returned to the best-seller lists with a novel about a nymphomaniac, A Second-Hand Life, but the following year he died of an overdose at the Hotel Chelsea in Manhattan.

Blake Bailey is the author of Farther & Wilder: The Lost Weekends and Literary Dreams of Charles Jackson. His other books include A Tragic Honesty: The Life and Work of Richard Yates, finalist for the National Book Critics Circle Award, and Cheever: A Life, winner of the National Book Critics Circle Award, the Francis Parkman Prize, and finalist for the Pulitzer and James Tait Black Memorial Prize. He edited a two-volume edition of Cheever’s work for The Library of America, and in 2010 received an Award in Literature from the American Academy of Arts and Letters. He lives in Virginia with his wife and daughter.

“Marvelous and horrifying. . . .  The best fictional account of alcoholism I have read.”
—Kingsley Amis

“A masterpiece . . . a book so powerful and understanding that many readers will find themselves riveted to their chairs until the end.”
—The Saturday Review of Literature

“The novel is a miracle, handed down to Mr. Jackson by a higher power. Every sentence is right. . . . Let's put it on the top shelf again, for all us lucky ex-drunks.”
—Barry Hannah