The Other Language (Hardcover) 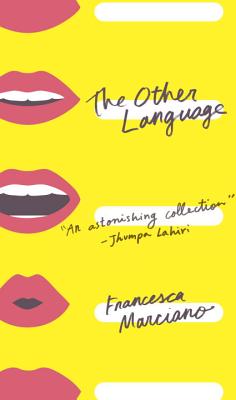 A woman splurges on a Chanel dress to celebrate professional success, a teenage girl finds first love while mourning her mother's death, a white Kenyan lady searches for her place after a mixed-race marriage - these layered stories set in varied locales offer surprising twists of character and plot. — Amy Palmer

Hailed by "The New York Times" as a natural-born storyteller, the acclaimed author of "Rules of the Wild" gives us nine incandescently smart stories, funny, elegant, and poignant by turns, that explore the power of change in relationships, in geographies, and across cultures to reveal unexpected aspects of ourselves.
Taking us to Venice during film festival season, where a woman buys a Chanel dress she can barely afford; to a sun-drenched Greek village at the height of the summer holidays, where a teenager encounters the shocksof first love; and to a classical dance community in southern India, where a couple gives in to the urge to wander, these remarkable tales bring to life characters stepping outside their boundaries into new passions and destinies. Enlivened by Francesca Marciano's wit, clear eye, and stunning evocations of people and places, "The Other Language" is an enthralling tour de force rich with many pleasures.

FRANCESCA MARCIANO is the author of the novels" Rules of the Wild, Casa Rossa, " and "The End of Manners." She lives in Rome.

“Magical, fleet-footed stories [that] leap around the globe, written with authority and storytelling virtuosity . . . What makes these tales stand out is Marciano’s sympathetic but wryly unsentimental ability—not unlike Alice Munro’s—to capture the entire arc of a character’s life in a handful of pages, and her precise yet fluent prose that immerses us, ineluctably, in the predicaments of her men and women . . . Captivating.” —Michiko Kakutani, The New York Times

“This is an astonishing collection. Marciano’s characters are caught between the coming and going, unable to call any one place home. They struggle with self-definition. They seek re-invention. Impulsive characters, portrayed in moments of juncture, in moments of crisis, in a series of indelible scenes. Written with extraordinary clarity and elegance, The Other Language is a vision of geography as it grounds us, as it shatters us, as it transforms the soul.” —Jhumpa Lahiri

“Impressive . . . With bilingual fluidity and a geographic carousel as a CV, Francesca Marciano’s worldview is expansive and deft. Her nine-story collection examines the very notion of a ‘journey.’ And where it may take us. Jettisoning exhausted re-invention clichés, she observes her actors as they choose fresh settings, and sometimes-unfamiliar grammars. What they desire is to move beyond familiar boundaries—of all kinds—in search of a ‘real’ or ‘other’ self. In this self-hunt, eight of Marciano’s third person tales focus on female protagonists, women juggling volcanic life changes and emotions . . . The heart of this book lies in a question: What happens when we deliberately pass a threshold, or open a hidden door? . . . Marciano’s sparkling collection poignantly traces an eternal human dream: that there is a better life, worth living. Perhaps in a change of geography, language, or identity. As her ironically provocative tales prove: the dream goes on. Penetrating, bittersweet.” —Patricia E. Fogarty, The American

“Compelling . . . The characters in Marciano’s stories are displaced—both geographically and in matters of the heart. They are educated, well-heeled and discontent, adrift in an ever-contracting world that has clouded the notion of home. The title story—one of the finest—begins with an enticing Alice Munro-like premise . . . In 'An Indian Soirée,' reminiscent of the atmospheric, incisive stories of Ruth Prawer Jhabvala, a couple has come to the subcontinent for an extended sojourn, and in one the space of one morning their marriage falls apart . . . 'Quantum Theory,' set in Africa and New York, offers a bittersweet meditation on the significant difference between falling in love and being in love . . . Many of these nine well-crafted and entertaining stories are built on chance encounters, and in Marciano’s assured hands the reader accepts the intervention of fate without question. These are stories about finding love in a fragile world, but even more, about all of the connections—past and present—that shape us and anchor us in place.” —Robert Weibezahl, BookPage

“Seductive, cosmopolitan . . . In The Other Language, romance is the cure for ennui. Marciano’s heroines take the kind of risks most of us have been conditioned to avoid: they reconnect with lost lovers, migrate to faraway lands, and forge liaisons beyond the bounds of their race, culture, and class. Marciano is an apt guide to these exotic lives, [and] she engages us intimately with them . . . Frustrated communication is a recurrent theme, as is the quest for the elusive person or place that allows one to feel at home. In Marciano’s nuanced emotional universe, a foreigner is likely to consider herself an outsider, no matter how long she’s lived elsewhere—especially if she still dreams in her mother tongue.” —Amy Fine Collins, O, The Oprah Magazine

“From Rome with love, this elegant and colorful collection will get you seriously thinking about giving up life in the States and going to Venice, a small Greek village, or any of the other places she uses as a setting in her stories.” —Jason Diamond, Flavorwire

“You hold in your hands 304 pages of dynamite. These stories are worldly, political, and funny to boot. I’ve loved Marciano’s writing since her first novel, Rules of the Wild—but I am completely hot for The Other Language.” —Gary Shteyngart

“The Other Language is a voyage around the world, among travelers and tourists, expats and interlopers, from the fringes of the Venice Film Festival, to a sumptuous vacation spot in India, to a remote island in East Africa, and beyond. This outstanding book has a quality I find only in the best short-story collections: that, after each chapter, I cannot immediately flip to the next, but need time to absorb what has just unfolded so memorably before me. Francesca Marciano is a superb storyteller.” —Tom Rachman, author of The Imperfectionists

“I loved every single one of these affecting, suspenseful, and sublimely crafted stories. It’s clear that Francesca Marciano is worldly as well as wise, yet what she’s surprisingly insightful about is the hazardous nature of worldliness itself. Because our modern lives are so mobile, our ways of communicating so refined, we risk coming to believe that the borders defining class, culture, and gender are somehow more permeable. Think again, she tells us in these nine cautionary tales—the best new collection I’ve read in years.” —Julia Glass

“I love being in Marciano’s unpredictable worlds. These are touching and true stories about the hiddenness of the hearts of the people closest to us, and what’s hiding in our own hearts. The writing is so moving, and conveys so much truth with a marvelously light and tender touch. One feels a haunting recognition for the minuscule losses that are such a large part of everyday life.” —Sheila Heti

“An absolute delight. Marciano has conjured up a set of far-flung characters—in Rome, Venice, New York, a Greek island, the coast of East Africa—as they struggle to make sense of their geographical and emotional displacement. In their disjointed ways, they succeed in finding their own little perch, and a modicum of serenity, in this wide universe. A collection so compelling, so satisfying and ultimately so addictive that one closes the book hankering for more.” —Andrea di Robilant

“In each transfixing, emotionally charged, sexy, piquantly funny, and perfectly rendered story, Marciano makes you feel the heat of the sun, the shiver of shadow, and the shock of unforeseen lust and loss. As she dramatizes with spellbinding command the revelations of displacement, the aphrodisiac power of fame, and the slipperiness of love and authenticity, you can’t bear to finish Marciano’s superlative stories, even though you can’t wait to find out what happens.”—Donna Seaman, Booklist (starred review)

“Lovely . . . Each of Marciano’s nine closely observed stories of growing up, dislocation and family relationships is a gem, with fully realized characters wistfully and beautifully captured through dialogue that is both pensive and poignant.” —Kirkus (starred review)

“Excellent . . . Generations of Italian fled the poverty of their native country, never to return. But in this century, Italians leaving Italy are highly mobile citizens of the globalized world who, nevertheless, remain recognizably Italian. It’s these Italians who populate Marciano’s stories. Her women (and sometimes her men) don’t necessarily want what they have—they make choices and make do; they travel, get divorced, adapt. The effect is both luxurious and down to earth, a pleasurable sojourn with characters Marciano depicts as simultaneously likable and irritating, bold and retiring, types and individuals—not unlike those reading about them. [A] strong collection.” —Publishers Weekly

“Seductive, cosmopolitan . . . In The Other Language, romance is the cure for ennui. Marciano’s heroines take the kind of risks most of us have been conditioned to avoid: they reconnect with lost lovers, migrate to faraway lands, and forge liaisons beyond the bounds of their race, culture, and class. Marciano is an apt guide to these exotic lives, [and] she engages us intimately with them . . . Frustrated communication is a recurrent theme, as is the quest for the elusive person or place that allows one to feel at home. In Marciano’s nuanced emotional universe, a foreigner is likely to consider herself an outsider, no matter how long she’s lived elsewhere—especially if she still dreams in her mother tongue.” —Amy Fine Collins, O, The Oprah Magazine