The Liberator: One World War II Soldier's 500-Day Odyssey from the Beaches of Sicily to the Gates of Dachau (Hardcover) 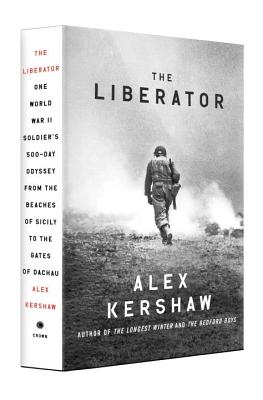 Kershaw at his singular best. Brings the realities of individual World War II combat vividly to life and simultaneously leaves the reader with an abiding conviction that this war against pure evil was fought for the most noble reasons...and that Felix Sparks should be called a hero. — Bill Lewis

The true story of the bloodiest and most dramatic march to victory of the Second World War: the battlefield odyssey of a maverick U.S. Army officer and his infantry unit as they fought for over five hundred days to liberate Europe - from the invasion of Italy to the gates of Dachau.
From July 10, 1943, the date of the Allied landing in Sicily, to May 8, 1945, when victory in Europe was declared the entire time it took to liberate Europe no regiment saw more action, and no single platoon, company, or battalion endured worse, than the ones commanded by Felix Sparks, who had entered the war as a greenhorn second lieutenant of the 157th Eager for Duty Infantry Regiment of the 45th Thunderbird Division. Sparks and his fellow Thunderbirdsfoughtlongest and hardest to defeat Hitler, often against his most fanatical troops, when the odds on the battlefield were even and the fortunes of the Allies hung in the balance and when the difference between defeat and victory was a matter of character, not tactics or armor.
Drawing on extensive interviews with Sparks and dozens of his men, as well as over five years of research in Europe and in archives across the US, historian Alex Kershaw masterfully recounts one of the most inspiring and heroicjourneysin military history. Over the course of four amphibious invasions, Sparks rose from captain to colonel as he battled from the beaches of Sicily through the mountains of Italy and France, ultimately enduring bitter and desperate winter combat against thediehardSS on the Fatherland's borders. Though he lost all of his company to save the Allied beach-head at Anzio and an entire battalion in the dark forests of the Vosges, Sparks miraculously survived the long bloody march across Europe and was selected to lead a final charge to Bavaria to hunt down Adolf Hitler.
In the dying days of the Third Reich, Sparksand his mencrossed the last great barrier in the West, the Rhine, only to experiencesome ofthe most intense street fighting and close combat suffered by Americans in WWII. When they finally arrived at the gates of Dachau, Hitler's first and most notorious concentration camp, the Thunderbirds confronted scenes that robbed the mind of reason. With victory within grasp, Sparksconfronted the ultimate test of his humanity: after all he had faced, could he resist the urge to wreak vengeance on the men who had caused untold suffering and misery?
Written with the narrative drive and vivid immediacy of Kershaw's previous bestselling books about American infantrymen in WWII, "The Liberator"is a story for the ages, an intensely human and dramatic account of one of history's greatest warriors and his unheralded role in America's finest achievement the defeat of Nazi Germany.

“Exceptional….The Liberator balances evocative prose with attention to detail and is a worthy addition to vibrant classics of small-unit history like Stephen Ambrose's Band of Brothers….From the desert of Arizona to the moral crypt of Dachau, Mr. Kershaw's book bears witness to the hell that America's innocents came through, and the humanity they struggled to keep in their hearts.” – Wall Street Journal

“A revealing portrait of a man who led by example and suffered a deep emotional wound with the loss of each soldier under his command….The Liberator is a worthwhile and fast-paced examination of a dedicated officer navigating — and somehow surviving — World War II.” – Washington Post

“Kershaw’s writing is seamless. He incorporates information from a vast array of sources, but it works – you get a sense of the different voices coming into the story….A gripping read.” – Minneapolis Star Tribune

“A history of the American war experience in miniature, from the hard-charging enthusiasm of the initial landings to the clear-eyed horror of the liberation of the concentration camps….An uncynical, patriotic look at our finest hour.” – The Daily Beast

“Kershaw has ensured that individuals and entire battles that might have been lost to history, or overshadowed by more ‘important’ people and events, have their own place in the vast, protean tale of World War II....Where Kershaw succeeds, and where The Liberator is at its most riveting and satisfying, is in its delineation of Felix Sparks as a good man that other men would follow into Hell — and in its unblinking, matter-of-fact description, in battle after battle, of just how gruesome, terrifying and dehumanizing that Hell could be.” – Time.com

“Kershaw’s accounts of the battles Sparks survived are clear and grisly and gripping.” – World War II

“[Kershaw] is a captivating narrator, hammering home the chaos and carnage of war, sparing no sensory detail to paint a cohesive picture.  [His] portrayal of his subject (based on interviews with Sparks, who died in 2007, and other survivors) makes for a riveting, almost epic tale of a larger-than-life, underappreciated figure.” – Publishers Weekly (starred review)

“This engrossing wartime narrative offers a fresh look at the European campaign and an intimate sense of the war’s toll on individual participants.” – Kirkus Reviews

“Alex Kershaw's gripping account of one man's wartime experiences has both the intimacy of a diary and the epic reach of a military history.  The Liberator reminds us of the complexity and moral ambiguity of the Second World War.” – Amanda Foreman, author of A World on Fire

“A searing, brilliantly told story of the heroism and horror of war, Alex Kershaw’s The Liberator is a book that’s impossible to put down. A must read for anyone who loved Band of Brothers.” – Lynne Olson, author of Citizens of London

“Alex Kershaw, long acclaimed for his terse, lightning-fast narratives of true wartime action and heroism, reaches his full maturity with this sweeping saga of a legendary infantry unit and the leader who spurred it to glory.” – Ron Powers, co-author of Flags of Our Fathers

“A literary tour de force.  Kershaw brilliantly captures the pathos and untold perspective of WWII through the eyes of one of its most courageous, unsung officers – a great leader, who always put his men first.  The Liberator is a compelling, cinematic story of the highest order." – Patrick K. O’Donnell, combat historian and author of Dog Company