Falling Upwards: How We Took to the Air: An Unconventional History of Ballooning (Paperback) 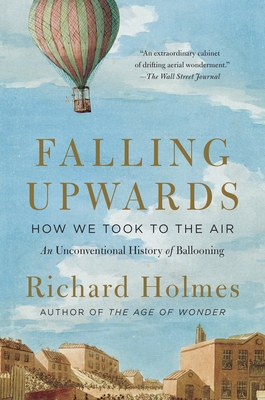 Ballooning, from ancient China to today, concentrating on the 19th century men and women – explorers, scientists, geographers, writers, adventurers – who took to the sky. An exhilarating, marvelous book from the outstanding biographer and author of the Northshire favorite, The Age of Wonder.

In a dazzling fusion of history, art, science, and biography, Falling Upwards resurrects the daring men and women who first risked their lives to take to the air in balloons.

Richard Holmes gives us another of his unforgettable portraits of human endeavor, recklessness, and vision, weaving together exhilarating accounts of early balloon rivalries, pioneering ascents over Victorian cities, and astonishing long-distance voyages. The terrifying high-altitude flights of James Glaisher helped to establish the science of meteorology as well as the notion of a fragile planet, while balloons were also used to observe the horrors of modern battle during the American Civil War. Here too are the many writers—Mary Shelley, Edgar Allan Poe, Charles Dickens, Jules Verne, and more—who felt the imaginative impact of flight and allowed it to soar in their work. Holmes tells the history of ballooning from every angle—scientific to poetic—through the adventurers and entrepreneurs, scientists and escapists, heroes and fools who were possessed by the longing to be airborne.

RICHARD HOLMES is the author of The Age of Wonder, which was short-listed for the Samuel Johnson Prize for Non-Fiction, won the Royal Society Prize for Science Books and the National Books Critics Circle Award, and was one of The New York Times Book Review’s Best Books of the Year in 2009. Holmes’s other books include Footsteps, Sidetracks, Shelley: The Pursuit (winner of the Somerset Maugham Award) Coleridge: Early Visions (winner of the1989 Whitbread Book of the Year Award) Coleridge: Darker Reflections (an NBCC finalist), and Dr. Johnson & Mr. Savage (winner of the James Tait Black Prize). He was awarded the OBE in 1992. He lives in England.

“No writer alive writes better about the past than Holmes. . . . The stories are remarkable.” —The New York Times Book Review

“Holmes has a rare and infectious capacity for wonderment. . . . He tells his balloon stories with inimitable zest. . . . A heady, swoopingly aerodynamic book.” —The Observer (UK)

“Holmes’s writing is a carnival of historical delights; at every turn there is a surprise. . . . He sneaks the whole trajectory of mankind into three hundred and fifty pages.” —The New Yorker.com

“Enthralling, picaresque history. . . . Holmes cuts his thrilling set-pieces with haunting images. . . . Appropriately, his prose is lighter than air, elegantly traversing aviators and eras. It means that as his balloonists embark on journeys full of danger and wonder the reader is suspended in the basket alongside them.” —Financial Times

“The book that gave me the most unadulterated delight this year. . . . The book is nominally a history of the hot air balloon, but it would be more accurate to describe it as a history of hope and fantasy—and the quixotic characters who disobeyed that most fundamental laws of physics and gave humans flight.” —Chloe Schama, The New Republic

“Holmes’ passion for the topic comes through in this rich and often entertaining chronicle of intrepid vertical explorers who risked (and in many cases lost) their lives lifting human flight out of the realm of mythology and into the air.” —Discover

“Holmes is a charming and impassioned guide. . . . His prose often reaches a moving pitch.” —Newsday

“Holmes’ love for the balloon . . . is obvious. . . . A fine addition to his already extraordinary oeuvre.” —Cleveland Plain Dealer

“A book as delightful as it is unexpected, one that is a testament to the sheer pleasures of writing about what you know, about what excites you and what gives you joy. And what more joyous a topic than the hilarious insanities of ‘Falling upwards’!” —The Wall Street Journal

“A full-blown, lyrical history . . . investigating the strangeness, detachment and powerful romance of ‘falling upwards’ into a seemingly alien and uninhabitable element. . . . Holmes is a truly masterly storyteller .” —London Evening Standard

“The human drama…is marvelously handled. . . . Holmes has made a subtle and captivating whole of this series of aerial adventures.” —Times Literary Supplement (London)

“A captivating and surely definitive history of the madness of pre–Wright brothers ballooning.” —The Times (London), Book of the Week

“The delight [of] the author . . . carries over to the reader. Above all what Holmes teases out . . . is the very interesting idea that ballooning gave us, quite literally, a different point of view [and] a wholly novel experience of sublimity. This exhilarating book, wonderfully written, generously illustrated and beautifully published, captures all that and more.” —The Spectator