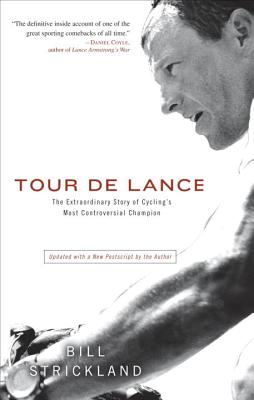 By Bill Strickland
$16.00
Hard to Find - May no longer be available

In 2009, 37 year old Lance Armstrong decided to return from retirement after a multi-year absence from his prior seven year dominance of the Tour de France. Besides the interesting snippets of backstory- Strickland has been around Lance and the inner working of the upper levels of competitive cycling for years- the real fascination is watching one of the dominant figures of sport adapting to the new realities of his older body as he tackles- with a staggering degree of success- his especially challenging "come back Tour". — Jon Fine

Lance Armstrong is a worldwide icon, indisputably one of the greatest cyclists who has ever lived. After battling cancer and becoming an inspiration to millions, Armstrong won the Tour de France a record-breaking seven consecutive years before retiring from competition in 2005.

Four years later, at thirty-seven, Armstrong decided to come out of retirement and go for the win yet again. He was racing for no salary, in a season when his greatest rival--Tour de France, Tour of Italy, and Tour of Spain champion Alberto Contador--was on his own team. The twenty-five-year-old Spaniard had been handpicked by Armstrong's own mentor, Johan Bruyneel, to be his successor. Now he would be his fiercest competition. Armstrong was about to suffer like never before--and, for the first time in recent memory, appear to be human on a bicycle.

After seven Tour victories--and beating cancer--did Lance Armstrong really need to prove anything? Beyond the thrill of another possible victory, what drove him to race again? What was he seeking--and would he find it?

Cycling insider Bill Strickland had unprecedented access to Armstrong, Johan Bruyneel, and the team. He takes readers behind the scenes during the 2009 racing season and along for the ride on the Tour de France with a dramatic mile-by-mile account. Offering a penetrating and candid glimpse into the man behind the myth, Tour de Lance goes beyond a single season or a single race to reveal the heart of the sport and the soul of the cyclist.

Bill Strickland is the editor-at-large for "Bicycling" magazine and the author of "Ten Points," "We Might as Well Win" (coauthored with JOhan Bruyneel), and "The Quotable Cyclist." He has ridden and raced throughout Europe, Australia, and Africa, and he currently races for the amateur cycling team Hup United. He lives in Emmaus, Pennsylvania. "From the Hardcover edition."

"Cycling writer Strickland is all over the story of Lance Armstrong’s return in 2009, after a three-year absence, to the Tour de France....Strickland, who had access to Armstrong’s inner circle, enhances it with an eye for detail and an understanding of its importance in the context of cycling’s own physical demands and singular history. An irresistible account of a story that needed telling."
—Booklist, starred review