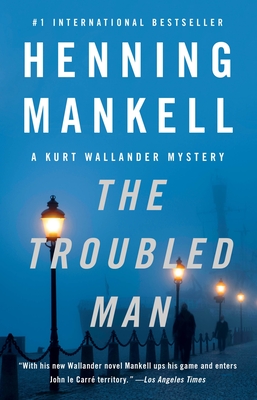 This is book number 11 in the Kurt Wallander Series series.

The tenth and final Kurt Wallander novel. A retired naval commander asks Wallander to unofficially investigate why an unidentified submarine which the commander was ordered not to pursue was in Swedish waters in 1980. Several days later the commander disappears. Then his wife goes missing. Very entertaining and a terrific series finale. — Sarah Knight

Mankell reveals more about the cantankerous Wallender here than ever before, especially his relationships with his ex-wife, ex-lover and his daughter Linda, who presents him with a granddaughter. The plot, part police investigation, part espionage inquiry, is engrossing and satisfying, even though loose ends remain. — Louise Jones

“Wallander, coming to an age where retirement becomes inevitable, realizes that life is not without end, that neglect of his physical needs is taking its toll, that his mind may not be as sharp as before. Amid all these thoughts he gets personally, not professionally, involved in a police investigation of his daughter's father-in-law, a former Swedish Naval officer. Wallander is still a capable, if sometimes wayward, detective, but this novel focuses more on the man himself, as he comes to terms with his age, his past, and his deep love for his daughter and granddaughter.”
— Jean-Paul Adriaansen, Water Street Books, Exeter, NH

The tenth riveting installment in the mystery thriller series that inspired the Netflix crime drama Young Wallander • "As satisfying for its emotional depth as its suspense.... A gripping mystery.” —PEOPLE Magazine

A retired navy officer has vanished in a forest near Stockholm. Kurt Wallander is prepared to stay out of the relatively straightforward investigation—which is, after all, another detective’s responsibility—but the missing man is his daughter’s father-in-law.

With his typical disregard for rules and regulations, Wallander is soon pursuing his own brand of dogged detective work on someone else’s case. His methods are often questionable, but the results are not: he finds an extremely complex situation which may involve the secret police and ties back to Cold War espionage. Adding to Wallander’s concerns are more personal troubles. Having turned sixty, and having long neglected his health, he’s become convinced that his memory is failing. As he pursues this baffling case, he must come to grips not only with the facts at hand, but also with his own troubling situation.

Henning Mankell’s novels have been translated into forty languages and have sold more than thirty million copies worldwide. He is the first winner of the Ripper Award (the new European prize for crime fiction) and has also received the Glass Key and Golden Dagger awards. His Kurt Wallander mysteries were adapted into a PBS television series starring Kenneth Branagh. Mankell divides his time between Sweden and Mozambique.

“[The] perpetually dour Swedish detective is at his gloomy best.” —The New York Times Book Review

“At once richer in personal detail and more suspenseful than either a work of strictly mainstream fiction or a simple police novel could be. Mankell remains in the vanguard of those writers taking the crime story back to its origins in the realistic novel.” —San Francisco Chronicle

“Mankell’s prose is as blunt and pragmatic as his hero.” —The New Yorker

“By far the most personal and poignant in this classic and compulsive series.” —New York Journal of Books

“Mankell’s ability to unspool a mystery and Wallander’s ability to solve it are still at the head of the class.” —Newsday

“A story that rings deep and hinges on personal stakes. . . . It is the voice of the author—through his hero—and the illumination of layers of life in a thankless profession that lead into a delicious abyss of urgency battling with hopelessness, a rationalization of risk versus a reward already buried under a false headstone.” —The Oregonian