The Bolter: The Story of Idina Sackville, Who Ran Away to Become the Chief Seductress of Kenya's Scandalous "Happy Valley Set" (Paperback) 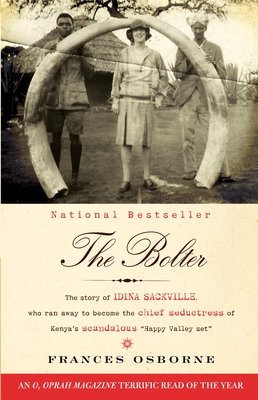 Lady Idina Sackville was an amoral free spirit and leading lady in the "Happy Valley" set of fast-living British who lived in Kenya between the wars. Osborne, a great-granddaughter, skillfully uses family letters, photos and interviews to bring this adventurous, five-time married woman to life. — Louise Jones

A San Francisco Chronicle Best Book of the Year
An O, The Oprah Magazine #1 Terrific Read

In an age of bolters—women who broke the rules and fled their marriages—Idina Sackville was the most celebrated of them all. Her relentless affairs, wild sex parties, and brazen flaunting of convention shocked high society and inspired countless writers and artists, from Nancy Mitford to Greta Garbo. But Idina’s compelling charm masked the pain of betrayal and heartbreak.

Now Frances Osborne explores the life of Idina, her enigmatic great-grandmother, using letters, diaries, and family legend, following her from Edwardian London to the hills of Kenya, where she reigned over the scandalous antics of the “Happy Valley Set.” Dazzlingly chic yet warmly intimate, The Bolter is a fascinating look at a woman whose energy still burns bright almost a century later.

Frances Osborne was born in London and studied philosophy and modern languages at Oxford University. She is the author of Lilla’s Feast. Her articles have appeared in The Daily Telegraph, The Times, The Independent, the Daily Mail, and Vogue. She lives in London with her husband, a Member of Parliament, and their two children.

“If notorious relatives make for the best dinner-party anecdotes, then Frances Osborne should be able to dine out for decades…. Enthralling.” —The Plain Dealer

“Idina Sackville . . . could have stepped out of an Evelyn Waugh satire about the bright young things who partied away their days in the ‘20s and ‘30s, and later crashed and burned. . . . Frances Osborne . . . conjure[s] a vanished world with novelistic detail and flair.” —The New York Times

“An engaging book, drawing a revealing portrait of a remarkable woman and adding humanity to her ‘scandalous’ life. . . . Ms. Osborne has succeeded in her stated aim, to write a book that ‘has in a way brought Idina back to life.’ And what a life it was.” —The Wall Street Journal

“Vibrant. . . . Osborne connects vast expanses of the dots that formed Idina’s reality: the gender inequalities in Edwardian England, the economic imperatives of colonialism, the mores of upper-class adultery, the differences between Idina’s aristocratic father . . . and her merely wealthy mother.” —Newsday

“[Idina Sackville’s] life story, speckled with the names of the rich and famous, is a miniature history lesson, bringing into sharp focus both world wars, the Jazz Age, and the colonization of Kenya. . . . Sackville’s passion lights up the page.” —Entertainment Weekly

“[A] rumbustious and harrowing biography that takes us from London to Newport to Kenya. . . . A feast for the Anglophile.” —The New York Times Book Review

“Brilliant and utterly divine. . . . A breath of fresh air from a vanished world.” —The Daily Beast

“The Bolter is a biographical treat.” —Good Housekeeping

“An engaging, definitive final look back at those naughty people who, between the wars, took their bad behavior off to Kenya and whose upper-class delinquency became gilded with unjustified glamour.” —Financial Times

“A sympathetic but evenhanded portrait of a woman driven by needs and desires even she didn’t understand.” —The Columbus Dispatch

“Truly interesting. Osborne paints an enthralling portrait of upper class English life just before, during and immediately after the Great War. Frivolous, rich, sexy [and] achingly fashionable.” —The Observer (London)

“Even today Lady Idina Sackville could get tongues wagging. . . . A lively portrait of the UK-born troublemaker, a woman who took countless lovers, raised hell in England and Africa, inspired novels by Nancy Mitford and carried around a dog she named Satan. . . . Through [Idina’s] story, we not only get a sexy and difficult-to-put-down read, we also get a good look at the shadow side of this prim and proper era and the real women who defied convention to live in it.”—Jessa Crispin, “Books We Like,” NPR

“A racy romp underpinned by some impressive research.” —The Sunday Telegraph (London)

“Passionate and headstrong, Lady Idina was determined to be free even if the cost was scandal and ruin. Frances Osborne has brilliantly captured not only one woman’s life but an entire lost society.” —Amanda Foreman, author of Georgiana: Duchess of Devonshire

“Told very much like a novel, The Bolter introduces readers to a world where every rule is broken and creating a scene is the latest fashion accessory.” —The Daily Texan

“Not only is it a beautifully written, intriguing chronicle of a frenetic, privileged, and profoundly sad life, it catches a social group and the mad-cap lives they led—so luxurious, so wasted. . . . Superb.” —Barbara Goldsmith, author of Obsessive Genius and Little Gloria. . . Happy at Last

“Drawing on family letters, Osborne’s portrait creates sympathy not for Idina’s reckless behavior but for the emotional emptiness that provoked her far-flung, self defeating yet undeniably glamorous search for love.” —More

“Fascinating. . . . Beautifully written. . . . Frances Osborne brings the decadence of Britain’s dying aristocracy vividly to life in this story of scandal and heartbreak.”—Simon Sebag Montefiore, author of Young Stalin and Stalin: The Court of the Red Tsar

“Sex, money, glamour, and scandal make Idina Sackville’s story hard to put down.  What brings that story to life is the courage of an incorrigibly stylish survivor. Searching for the woman behind the legend, Osborne [gives us] a heroine impossible to resist.”  —Frances Kiernan, author of The Last Mrs. Astor and Seeing Mary Plain: A life of Mary McCarthy