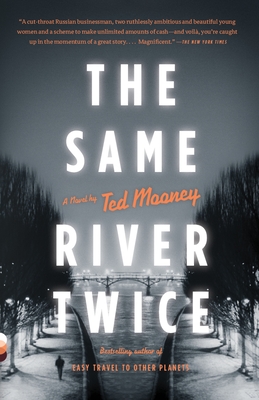 A NEW YORK TIMES NOTABLE BOOK • Odile Mével is a French clothing designer, her American husband, Max, an independent filmmaker. When Odile agrees to buy a selection of ceremonial May Day banners in the Soviet Union and deliver the contraband to Paris she earns a new job description: smuggler.

Soon her fellow courier disappears, her apartment is ransacked, and her friend’s houseboat is firebombed. While Max has no inkling of Odile’s dealings, he finds himself embroiled in a baffling film world mystery of his own. As their escapades deepen and their deceptions multiply, Odile and Max discover their secrets are connected—endangering not only their marriage but their lives.

Ted Mooney is the author of Easy Travel to Other Planets, Traffic and Laughter, and Singing into the Piano. His fiction has appeared in Esquire, Granta, and The New American Review, and he received grants from the Guggenheim and the Ingram Merrill foundations. He died in 2022.

“A cut-throat Russian businessman, two ruthlessly ambitious and beautiful young women and a scheme to make unlimited amount of cash—and voilà, you’re caught up in the momentum of a great story. . . . Magnificent.” —The New York Times

“The Same River Twice is a philosophical entertainment doubling as a riveting, unconventional thriller. . . . Dazzling . . . shimmering, charged.” —The Boston Globe

“The Same River Twice is the tale of beautiful losers living on the edge. . . . [A] lushly cinematic mystery . . . for the highbrow set—those who take their thrillers with a dash of art history.” —Minneapolis Star-Tribune

“It’s too bad that Alfred Hitchcock isn’t still around to direct a movie adaptation of this kaleidoscope of a novel of intrigue.” —St. Louis Post-Dispatch

“The Same River Twice could almost be filmed straight from the page. . . . [Mooney’s] up-to-date stylistic concerns, art world experience, and nods to 1980s-style branding lend an indefinable chic to a solid thriller.” —The New York Review of Books

“A riveting tale of intrigue and sexual attraction with the Russian mafia lurking in the shadows.” —Pittsburgh Post-Gazette

“A tour de force. . . . A taut and lively literary thriller that mingles the worlds of Paris and New York art collectors and filmmakers with a seamy and violent criminal underworld as it explores the nature of art, fate, and inevitability.” —Library Journal

“Read this stunning novel once for the pleasure of the hunt, and twice for the treasure between the lines: the pounding of the human heart, the intricate tick-tock as the gears of destiny accelerate. Mooney is a magician, and his new books sparkles like a mysterious city.” —Jayne Anne Phillips

“Mooney’s women [are] among the most shimmeringly intelligent in contemporary fiction.” —Philadelphia Inquirer

“A novelist with a gift for razor-sharp dialogue, for the brilliantly chiseled sentence and the memorably vivid scene.” —Newsday

“Rich, multilayered, powerfully unsettling. . . . [The Same River Twice] succeeds on a number of different levels: as a page-turning mystery in which conceptual art meets the scientific vanguard of stem-cell research and as a meditation on the trusts and betrayals of marriage, on truth and illusion and the relation of each to artistic creativity. . . . The whole comes together in a morally ambiguous manner that seems equally surprising, disturbing and inevitable.” —Kirkus Reviews

“[Mooney] is one of those rare writers whose take on the world is so original that one avidly reads whatever he chooses to write about.” —Chicago Tribune