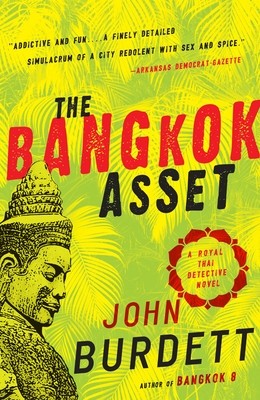 This is book number 6 in the Royal Thai Detective Novels series.

Another great ride in Thailand with John Burdett. Filled with authentic atmosphere and characters, the Bangkok Asset has Sonchai facing his deepest fears as he tries to solve a bizarre murder. We also bump into the futuristic world of enhanced humans, potentially used to control the masses. An interesting, fun and transporting read.

Royal Thai Police Detective Sonchai Jitpleecheep is called to investigate a crime scene in Bangkok—which quickly reveals itself to be anything but typical in this “intelligent, high-octane psychological thriller" (New York Journal of Books).

For one thing, the victim has been beheaded in a bizarre manner, and for another, a message was left in blood. Then Sonchai is summoned to a river in the middle of the night to observe a spectacle that violates everything he holds dear as a Thai, as a Buddhist, and as a human being.

A trail of breadcrumbs has been carefully laid out for him, but by whom? Sonchai’s search for answers takes him deep into the Cambodian jungle, where he faces a conspiracy that may implicate the American CIA and the Chinese military—and discovers exactly how far a government will go to protect its worst secrets.

John Burdett was brought up in North London and worked as a lawyer in Hong Kong. He is the author of eight novels, including the Royal Thai Detective series: Bangkok 8, Bangkok Tattoo, Bangkok Haunts, The Godfather of Kathmandu, Vulture Peak, and The Bangkok Asset.

“Addictive and fun. . . . A finely detailed simulacrum of a city redolent with sex and spice.”
—Arkansas Democrat-Gazette

“An intelligent, high-octane psychological thriller from a master storyteller at the top of his game.”
—New York Journal of Books

“Delightfully eccentric and unpredictable. . . . Sonchai is a terrific character: [a] wise, cheeky guide through Bangkok’s baffling but fascinating mix of cultures.”
—The Seattle Times

“Chilling and prophetic. . . . Burdett’s descriptions of the ins and outs of Bangkok, geographically and culturally, and the cast of exotic characters is just as riveting as the story. . . . This is not your daddy’s—or even your older sibling’s—police procedural.” —Bookreporter

“Vastly entertaining. . . . Featuring sardonic insight into both Thai and Western culture aplenty and plots which refuse to play by detective story rules, Burdett maneuvers us behind the eyes of Detective Jitpleecheep through Thailand’s City of Angels in all its durian-scented, haze-choked wonder.” —Electric Literature

“Burdett’s fever-dream mysteries, set in Bangkok, recast the police procedural as psychedelic peep show. . . . written with such louche authority that, by the end, one cheers the seemingly infinite multiplicity of Burdett’s universe.”
—The New Yorker

“John Burdett is writing the most exciting set of crime novels in the world.”
—The Oregonian

“The action is pretty much nonstop, and the characters continue to grow in complexity with each passing book. This is another atmospheric and suspenseful installment in one of the finest contemporary mystery series.”
—BookPage

“Wild and entertaining. . . . Comes together for a dramatic and satisfying ending.”
—Publishers Weekly