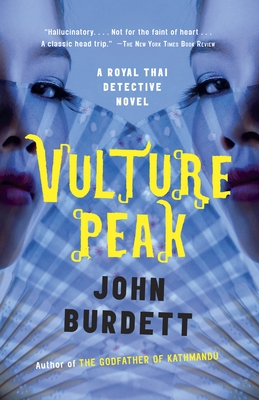 This is book number 5 in the Royal Thai Detective Novels series.

Burdett's detective Sonchai Jitpleecheep might be the last good cop in Bangkok - and even he stumbles sometimes. He'son the collective tail of twin body-part black marketeers in a thriller that combines Third World cunning with plenty of smart riffs on our new globalized reality. — Charles Bottomley

“Burdett's Sonchai Jitpleecheep novels feature an incomparable detective faced with some unforgettable crimes. In Vulture Peak, he is sent by his corrupt boss to investigate a triple murder that appears to be linked to traffic in human organs. Along the way, he runs into a powerful and powerfully, troubled set of twin sisters, and joins forces with a bipolar investigator from Hong Kong. Burdett's writing draws you in so completely that you may have jet lag by the time you reach the end. Fantastic!”
— Carol Schneck, Schuler Books & Music, Okemos, MI

Nobody knows Bangkok like Royal Thai Police Detective Sonchai Jitpleecheep, but now he is heading out of his comfort zone. Way out. Assigned to the highest-profile case in all Thailand, he is tasked with ending international human-organ trafficking. His hunt will lead him across five countries and will draw in a host of unwitting players, including an aging rock star wearing out his second liver, and his quarry, twin Chinese queenpins of the international body-parts trade known as the Vultures. Meanwhile, there are rumors at home that Sonchai’s wife is having an affair. Although he has always known about her disreputable past, this is something else entirely. Confronting the rumors—and controlling his jealousy—while embroiled in the most contentious case of his career may well be more than this detective’s Buddhist soul can handle.

John Burdett was brought up in North London and worked as a lawyer in Hong Kong. To date he has published seven novels, including the Bangkok series: Bangkok 8, Bangkok Tattoo, Bangkok Haunts, The Godfather of Kathmandu, and Vulture Peak.

“Redolent—in the most enjoyable way—of crime, violence, corruption and sex, not necessarily in that order. Vulture Peak upholds the high standards set by its predecessors.”
—The Washington Post

“Fine entertainment, with bite, from an author at home in many different worlds.”
—Pittsburgh Post-Gazette

“Time and again, John Burdett breaks the crime-thriller mold. And then reassembles it, piece by piece. His narrative becomes more than the sum of its parts. . . . Thoroughly enjoyable.”
—New York Journal of Books

“If you have never read John Burdett, the perfect place to start would be Vulture Peak.”
—Book Reporter

“John Burdett is writing the most exciting set of crime novels in the world.”
—The Oregonian

“What keeps the book buoyant is the observations of the hero, a Thai police detective obsessed with karma.”
—The New Yorker

“You might find yourself addicted to Burdett’s sizzling prose.”
—San Antonio Express News

“Fresh, humorous, and full of insights into Thailand.”
—Publishers Weekly