Autumn in the Heavenly Kingdom: China, the West, and the Epic Story of the Taiping Civil War (Paperback) 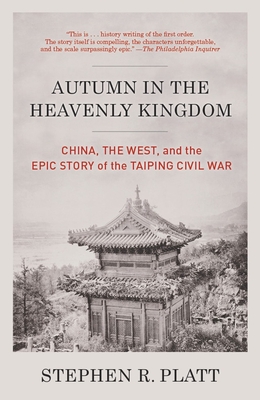 Superb, sobering, and vastly informative account of the deadliest civil war in recorded history . Should appeal to both serious and beginning students of Chinese history. Careful scholarship, elegant writing, and a cautionary tale about the consequences of foreign meddling. Stephen Platt is a young historian to watch. — Bill Lewis

Winner of the 2012 Cundill Prize in History

A gripping account of China’s nineteenth-century Taiping Rebellion, one of the largest civil wars in history. Autumn in the Heavenly Kingdom brims with unforgettable characters and vivid re-creations of massive and often gruesome battles—a sweeping yet intimate portrait of the conflict that shaped the fate of modern China.

The story begins in the early 1850s, the waning years of the Qing dynasty, when word spread of a major revolution brewing in the provinces, led by a failed civil servant who claimed to be the son of God and brother of Jesus. The Taiping rebels drew their power from the poor and the disenfranchised, unleashing the ethnic r