On a Farther Shore: The Life and Legacy of Rachel Carson, Author of Silent Spring (Hardcover) 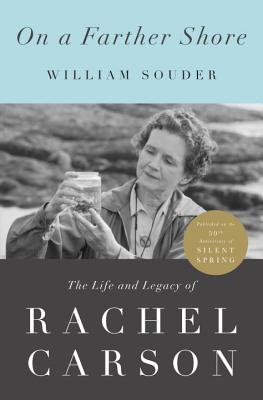 By William Souder
$30.00
Hard to Find - May no longer be available

This splendid, eminently readable biography shows Carson as a writer of great style and narrative grace, an assiduous researcher, a persistent advocate. A biologist, she edited reports for the Department of the Interior; a freelance writer, she won fame with her outstanding books – Under the Sea-Wind, The Sea Around Us and The Edge of the Sea. Silent Spring, her final, landmark work, published 50 years ago, created an uproar engendering the environmental movement and is still pertinent today.

Published on the fiftieth anniversary of her seminal book, Silent Spring, here is an indelible new portrait of Rachel Carson, founder of the environmental movement

She loved the ocean and wrote three books about its mysteries, including the international bestseller The Sea Around Us. But it was with her fourth book, Silent Spring, that this unassuming biologist transformed our relationship with the natural world.

Rachel Carson began work on Silent Spring in the late 1950s, when a dizzying array of synthetic pesticides had come into use. Leading this chemical onslaught was the insecticide DDT, whose inventor had won a Nobel Prize for its discovery. Effective against crop pests as well as insects that transmitted human diseases such as typhus and malaria, DDT had at first appeared safe. But as its use expanded, alarming reports surfaced of collateral damage to fish, birds, and other wildlife. Silent Spring was a chilling indictment of DDT and its effects, which were lasting, widespread, and lethal.

Published in 1962, Silent Spring shocked the public and forced the government to take action-despite a withering attack on Carson from the chemicals industry. The book awakened the world to the heedless contamination of the environment and eventually led to the establishment of the EPA and to the banning of DDT and a host of related pesticides. By drawing frightening parallels between dangerous chemicals and the then-pervasive fallout from nuclear testing, Carson opened a fault line between the gentle ideal of conservation and the more urgent new concept of environmentalism.

Elegantly written and meticulously researched, On a Farther Shore reveals a shy yet passionate woman more at home in the natural world than in the literary one that embraced her. William Souder also writes sensitively of Carson's romantic friendship with Dorothy Freeman, and of her death from cancer in 1964. This extraordinary new biography captures the essence of one of the great reformers of the twentieth century.

“Captivating…Souder writes vividly and with great empathy for his subject and her cause.” —New York Times Book Review

“A delightful, fascinating, engrossing read about some of the most important insights of modern science. You’ll find yourself thinking about Carson whenever you take a walk in the woods.” —Slate.com

WILLIAM SOUDER is the author of two previous books, A Plague of Frogs and Under a Wild Sky, a biography of John James Audubon that was a finalist for the Pulitzer Prize. He lives in Grant, Minnesota.

“This is the great strength of On a Farther Shore. Without overstating the point, Souder draws a portrait of cultural and political life in the middle of the 20th century and places Carson squarely at the center of it...In Souder’s telling she was a quintessential woman of her time.”
--Washington Post

"A suspenseful tale of the literary life….That, in 1962, a 55-year-old single mother could take on the government and pesticides industry and triumph in the face of illness, sexism, ageism and a deeply funded campaign against her makes for an utterly inspiring tale that also sounds a cautionary note."
--San Francisco Chronicle

“In Souder’s telling, almost every aspect of Carson’s life and times becomes captivating…Souder is at his best when he places Carson’s intellectual development in context with the nascent environmental movement…Souder writes vividly and with great empathy for his subject and her cause…An absorbing narrative.”
--Elizabeth Royte, New York Times Book Review

"This is the book to read about Carson's short life and work.”
--Wall Street Journal

"On a Farther Shore does full honor to the woman who wrote The Sense of Wonder….In the end, the book Souder has written is, like a poem, the thing itself, so perfectly does it capture a way of being in the world that Rachel Carson, both in her person and her work, radiated.” --Vivian Gornick, The Nation

“Beautifully written…Souder skillfully situates Carson’s life and particularly her writing career into the context of important events in the United States and around the world.  More to the point, Souder’s Carson is a portrait of the writer and, significantly, her writerly influences. Finally, Souder carefully analyzes Carson’s personality and relationships… Even when the stories ring familiar, his deft turn of phrase imbues them with new vitality. Thus, he offers readers a wonderful opportunity to celebrate a naturalist, author, and inspiration to the modern environmental movement.” --Frederick R. Davis, Science

“William Souder’s deeply studied, well-written biography of Rachel Carson helps us see her life work as crafting a narrative in which science is used to care for Earth.” --American Scientist

“Offer[s] a deep sense of Carson and her path to fame…Souder is throughout a sensitive and insightful biographer. That becomes clear when he explores the relationship Carson formed with Dorothy Freeman…No one has better gauged the relationship that provided the emotional sustenance that helped Carson endure the physical and emotional torments of her last years…Souder is an excellent environmental historian and always a lively writer… Both Carson and Silent Spring remain vital and controversial to this day. William Souder has told this story with all the richness and complexity it deserves.”
--Mark H. Lytle, The Buffalo News

"A compelling and compulsively readable portrait of one of the most influential writers of the last 50 years; a fascinating glimpse into the history of science’s dark incursions and excesses; and an illuminating portrait of the birth of the environmental controversies we know today.”
--Christian Science Monitor

“A three-dimensional, deeply illuminating picture of the life and times of this shy, unassuming trailblazer.”
--Minneapolis Star-Tribune

"A poignant, galvanizing, meaningful tribute...[Provides] readers with a clear sense of the political, economic and social ramifications of DDT use and the threat of atomic warfare and how Carson's writing played a vital role in progressive public policy for decades after her death."
--Kirkus Reviews (starred)

"At a time when genetic modification of foods remains politically charged and scientifically debatable, the story of Silent Spring and its author is valuable and relevant, and for those who have celebrated Carson’s work, this book is a treat full of big ideas and little details that satisfy and inspire. Fans of Carson, as well as of science writers like Aldo Leopold and Steven Jay Gould, will devour this book. As an achievement in biography and a celebration of science writing, it is strongly recommended."
--Library Journal (starred)

“In this expansive, nuanced biography, Souder (Under a Wild Sky) portrays Carson as a woman passionate in friendship, poetic and innovative in her books about the sea, gentle but ambitious, assiduously keeping tabs on her publisher's promotion of her work.... [and explores] cold war anxiety about nuclear annihilation, the chemistry of pesticides like DDT and their flagrant postwar use, and an emerging understanding of ecology. Carson, under severe stress and exhaustion from a cancer that took her life, synthesized these issues in Silent Spring, a meticulously researched, policy-changing picture of an earth poisoned by humanity. Fifty years later, her insights are suprisingly relevant: "We're challenged as mankind has never been challenged before to prove our maturity and our mastery not of nature, but of ourselves."
--Publishers Weekly

"To mark this watershed, Souder, author of a John James Audubon biography (Under a Wild Sky, 2004), brings a fresh and delving perspective to Carson’s trailblazing achievements and heroic sacrifices.... Souder returns Carson to us in all her poetic glory and strength as a singular artist and clarion champion of the living world."
--Booklist (starred)

"William Souder’s On a Farther Shore is one of those rare and extraordinary biographies that are at once brilliant portraiture and important environmental history. The great Rachel Carson comes alive again in these vivid pages--honest, committed, brave."
--Douglas Brinkley, Professor of History at Rice University, author of Wilderness Warrior and Cronkite

"In William Souder, Rachel Carson has a Carsonesque chronicler—morally incisive, poetic but unsentimental. On a Farther Shore is a vital and nuanced portrait of a giant of American letters and an absorbing history of the environmental movement."
--Lauren Redniss, author of Radioactive: Marie and Pierre Curie

"Rachel Carson changed the way we live now, and in William Souder she has a biographer who has given us a powerful portrait of a woman and of her work. Anyone interested in the intellectual, political, and cultural life of the past half century should read this fine book."
--Jon Meacham, author of American Lion: Andrew Jackson in the White House

"William Souder eloquently and convincingly argues for the relevance of Rachel Carson’s writings to today’s daunting environmental challenges. In this beautifully crafted biography, Souder shines a light as luminescent as some of Rachel Carson’s favorite specimens of marine life on one of the twentieth century’s most important figures."
--Elizabeth J. Rosenthal, author of Birdwatcher: The Life of Roger Tory Peterson

"Rachel Carson was not a saint but, better, a prophet--that rare soul who turns our attention into the path of the oncoming truth. In these illuminating, perspective-setting pages you feel her love for the living world, and the burden she bore in giving birth to the modern environmental movement, her gift to us all, that she never lived to see."
--Carl Safina, author of Song for the Blue Ocean and The View From Lazy Point

"William Souder tells the story of Rachel Carson's life with grace and sympathy. On a Farther Shore explains why Carson still matters, fifty years after the publication of Silent Spring."
--Elizabeth Kolbert, author of Field Notes from a Catastrophe

"Rachel Carson is the great green heroine, the first person to combine her love of the natural world with a penetrating glance at industrial modernity. William Souder captures her importance in this engaging biography."
--Bill McKibben, author of The End of Nature and Eaarth

"For those of us who know Rachel Carson's name but little else, this is the book to set us straight. In crystal clear prose, William Souder captures her remarkable journey from essayist to polemicist, from nature's gentle acolyte to its fierce defender, while he also provides us with the science we need along the way. We are in Souder's debt for vividly reminding us of the lesson Carson taught: we have the power to seriously harm nature and the solemn responsibility to conserve and protect it."
--Louise W. Knight, author of Jane Addams: Spirit in Action