In the President's Secret Service: Behind the Scenes with Agents in the Line of Fire and the Presidents They Protect (Paperback) 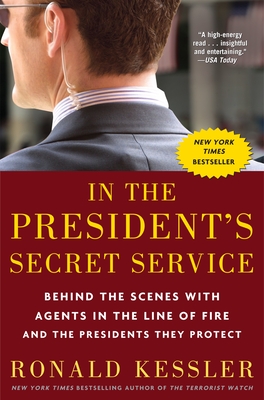 After conducting exclusive interviews with more than one hundred current and former Secret Service agents, bestselling author and award-winning reporter Ronald Kessler reveals their secrets for the first time.

Never before has a journalist penetrated the wall of secrecy that surrounds the U.S. Secret Service, that elite corps of agents who pledge to take a bullet to protect the president and his family. Kessler portrays the dangers that agents face and how they carry out their missions--from how they are trained to how they spot and assess potential threats. With fly-on-the-wall perspective, he captures the drama and tension that characterize agents’ lives and reveals what they have seen, providing startling, previously untold stories about the presidents, from John F. Kennedy and Lyndon Johnson to George W. Bush and Barack Obama, as well as about their families, Cabinet officers, and White House aides.

Ronald Kessler is the New York Times bestselling author of The Secrets of the FBI, In the President's Secret Service, and The CIA at War. A former Wall Street Journal and Washington Post investigative reporter, Kessler has won eighteen journalism awards, including two George Polk awards, one for national reporting and one for community service. He was named a Washingtonian of the Year by Washingtonian magazine. Kessler lives in Potomac, Maryland with his wife, Pamela Kessler.

“Rips the lid off the inside world of Secret Service agents and the presidents they protect.” —New York Post

The recent news report that corner-cutting at the U.S. Secret Service has put President Obama's life at greater risk may be the most attention-grabbing disclosure emerging from Ron Kessler's latest book. But there's a lot more in this fascinating exposé, which penetrates that federal agency's longstanding mission and tradition of sworn secrecy.

Never mind that the book's title is stiffer than the Secret Service's public persona — dour-faced agents wearing pressed suits, dark sunglasses and earphones, scouring crowds for potential threats. Inside the covers, Kessler's lively narrative is loaded with details of how the federal agents, authorized to protect the president and other national leaders, get the job done — and sometimes don't.

But what fuels this high-energy read isn't Kessler's investigation of the Secret Service's training, procedures and strategies — from guaranteeing the safety of the president's food to analyzing daily threats. Instead what turns these pages are the amusing, saucy, often disturbing anecdotes about the VIPs the Secret Service has protected and still protects. The secrets, in other words.

Some of it would border on tabloid sensationalism if it hadn't come directly from current and retired agents (most identified by name, to Kessler's credit). Of course, you'd expect the salacious stories of John Kennedy's libido, but the less-told tales of an often-drunken and philandering Lyndon Johnson caught with his pants down are shocking. Family-values champion Spiro Agnew had his hotel-room peccadilloes, it seems, and nice Jimmy Carter his animosities. Richard Nixon's peculiarities? Beyond excess.

Anecdotes of hard-to-handle members of the first families abound here as well, including Jenna and Barbara Bush's bar-hopping, Hillary Clinton's angry clashes with low-level White House employees, and Nancy Reagan's cold, controlling habits.
Balancing the sordid tales are the kinder stories of presidential humanity — like George H.W. Bush and an agent searching for hidden cookies in the middle of the night, Miss Lillian Carter delivering a six-pack to the Secret Service boys (dutifully refused), and Ronald Reagan mailing checks for thousands of dollars to needy strangers.

So why the all the blabbing from zip-lipped agents? A respected journalist and former Washington Post reporter, Kessler somehow instills trust even in wary civil servants and federal bureaucrats.

He did when researching such government-insider books as The Terrorist Watch and The CIA at War. He has done it again by persuading the Secret Service to cooperate, making this an insightful and entertaining story.