The Dark Side: The Inside Story of How the War on Terror Turned Into a War on American Ideals (Paperback) 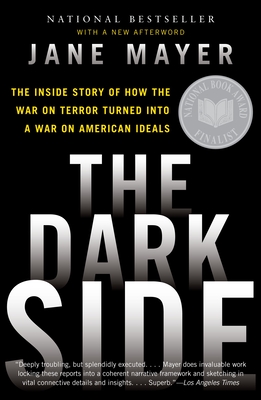 America has come a long way since "give me your tired, your poor..." We now have lawyers in the Bush administration, from the prospective of overstuffed sofas and boundless egos, attempting to define the degree of pain that can be inflicted upon people before it constitutes torture. That definition enjoys an especially wide latitude with Vice President Cheney, who decided he had "other priorities" when his own well-being was jeopardized by the Vietnam War. Jane Mayer's riveting and horrifying account of the jettisoning of values that this country has cherished since its inception under the guise of protecting us from terrorism should be required reading for every American who is determined that it should never be allowed to happen again. — Alden Graves

The Dark Side is a dramatic, riveting, and definitive narrative account of how the United States made self-destructive decisions in the pursuit of terrorists around the world—decisions that not only violated the Constitution, but also hampered the pursuit of Al Qaeda. In spellbinding detail, Jane Mayer relates the impact of these decisions by which key players, namely Vice President Dick Cheney and his powerful, secretive adviser David Addington, exploited September 11 to further a long held agenda to enhance presidential powers to a degree never known in U.S. history, and obliterate Constitutional protections that define the very essence of the American experiment. With a new afterward.

A Best Book of the Year: Salon, Slate, The Economist, The Washington Post, Cleveland Plain-Dealer

Jane Mayer is a staff writer for The New Yorker and the author of three bestselling and critically acclaimed narrative nonfiction books. She co-authored Landslide: The Unmaking of the President, 1984–1988, with Doyle McManus, and Strange Justice: The Selling of Clarence Thomas, with Jill Abramson, which was a finalist for the National Book Award. Her book The Dark Side: The Inside Story of How the War on Terror Turned into a War on American Ideals, for which she was awarded a Guggenheim Fellowship, was named one of The New York Times’s Top 10 Books of the Year and won the J. Anthony Lukas Book Prize, the Goldsmith Book Prize, the Edward Weintal Prize, the Ridenhour Prize, the New York Public Library’s Helen Bernstein Book Award for Excellence in Journalism, and the Robert F. Kennedy Book Award. It was also a finalist for the National Book Award and the National Book Critics Circle Award. For her reporting at The New Yorker,Mayer has been awarded the John Chancellor Award, the George Polk Award, the Toner Prize for Excellence in Political Reporting, and the I. F. Stone Medal for Journalistic Independence presented by the Nieman Foundation at Harvard. Mayer lives in Washington, D.C.

“Deeply troubling, but splendidly executed.... Mayer does invaluable work locking these reports into a coherent narrative framework and sketching in vital connective details and insights.... Superb.”—Los Angeles Times“A gripping, meticulously researched, and deeply disturbing book that vindicates the observation of the great Supreme Court Justice Louis Brandeis that 'the greatest dangers to liberty lurk in insidious encroachment by men of zeal, well-meaning but without understanding.'” —Parameters (U.S. Army War College Quarterly)“Essential reading.” —Pittsburgh Post-Gazette “Gripping.... Chilling.... [A] vivid and comprehensive account.” —The New York Times “One of those rare books that should be read by every concerned American.” —Austin American-Statesman“Stunning.” —Slate “Powerful, brilliantly researched, and deeply unsettling.... Extraordinary and invaluable.” —The New York Times Book Review“Some of The Dark Side seems right out of “The Final Days,” minus Nixon's operatic boozing and weeping.... Nixon parallels take us only so far, however. The Dark Side is scarier than “The Final Days” because these final days aren't over yet and because the stakes are much higher.”—Frank Rich, The New York Times“In The Dark Side, Jane Mayer, a staff writer for the New Yorker, documents some of the ugliest allegations of wrongdoing charged against the Bush administration. To dismiss these as wild, anti-American ravings will not do. They are facts, which Mayer substantiates in persuasive detail, citing the testimony not of noted liberals like Noam Chomsky or Keith Olbermann but of military officers, intelligence professionals, "hard-line law-and-order stalwarts in the criminal justice system" and impeccably conservative Bush appointees who resisted the conspiracy from within the administration.” —The Washington Post Book World“Whatever it takes to get those bastards. The true nature of our Faustian bargain would not become clear until later, and maybe it needed a journalist as steely and tenacious as Jane Mayer to give us the full picture. The Dark Side is about how the war on terror became "a war on American ideals," and Mayer gives this story all the weight and sorrow it deserves. Many books get tagged with the word "essential"; hers actually is.” —Salon.com “In Jane Mayer's angry and important book The Dark Side, the tenacious New Yorker reporter takes us, step by step, through the process by which practices and methods we associate with tyrannies became official U.S. policy.”—Bloomberg“[In] The Dark Side, Jane Mayer's riveting and shocking new book, and not the least of the themes to emerge from it is that we've witnessed something new in American history: the imperial vice presidency.”—New York Observer“Essential reading for those who think they can stand the truth.”—Bob Herbert, New York Times“Like a good suspense novel…. Potent and disturbing stuff.”—San Diego Tribune