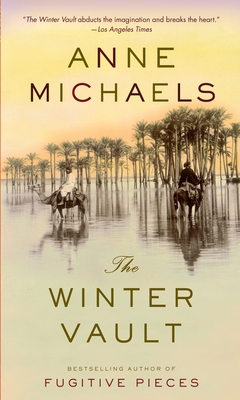 The author lays bare souls in this cinematic novel of loss, love and memory. As only a poet can do, she isolates thoughts and feelings and presents pure and vivid images that are almost archetypal. The characters draw close to each other by telling stories of their past and time flows constantly like the rivers that are at the heart of the story. Each location is a personage which is changed forever by human redirection of nature, whether through dam building or seaway construction...or war and its aftermath of rebuilding. People are caught up in these currents and must redirect their lives accordingly and the reader is swept along on a journey of introspection. — Karen Frank

In The Winter Vault, award-winning poet and novelist Anne Michaels crafts a love story of extraordinary depth and complexity, juxtaposing historic dislocations with the most intimate moments of individual lives.

In 1964, a newly married Canadian couple settles into a Nile River houseboat moored below the towering figures of Abu Simbel. Avery is one of the engineers responsible for moving the temple above the rapidly rising waters of the Aswan Dam. At the edge of a world about to be lost forever, Avery and and his new wife Jean begin to create their own world. But it will not be enough to bind them when tragedy strikes and they go back to separate lives in Toronto. There Jean meets Lucjan, a Polish artist whose haunting stories of his shattered childhood in occupied Warsaw draw her further away from Avery. But, in time, he will also show her the way back to consolation and forgiveness.

Anne Michaels’s first novel was the international best seller Fugitive Pieces, now a major motion picture. It won several awards, including the Lannan Literary Award for Fiction, the Chapters/Books in Canada First Novel Award, the Guardian Fiction Award, and the Orange Prize for Fiction. Michaels is also the author of three highly acclaimed poetry collections. She lives in Toronto.

“The Winter Vault abducts the imagination and breaks the heart.” —Los Angeles Times

“The Winter Vault reads [with] breathtaking power . . . To highlight brilliant passages (each a prismatic emblem of the whole) is to stripe nearly every page with color. . . . With great compassion, Michaels captures the inevitability of shifting human fortunes.” —San Francisco Chronicle

“Michaels has written another meticulous and profound poetic meditation on themes that weave and recur as the characters tell their stories. . . . Dense, rich, and beautifully written.” —Boston Globe

“Clearly the work of a poet; every page quietly sparkles with metaphors that are often startlingly beautiful.” —Seattle Times

“The impossibility of rescuing the past from the ravages of time, balanced with the unlikelihood, even the absurdity, of using this poetic language to document those ravages—is ultimately the great theme of The Winter Vault. . . . Michaels never pretends there’s a simple answer . . . Literature is all the better for it.” —New York Times Book Review

“Anne Michaels crafts her novels with exquisite care. . . . The Winter Vault is a densely packed repository. Read it for its scale of reference, its aching wisdom, its brutal beauty.” —Kansas City Star

“Who, in the real world, articulates thoughts on loss and yearning and death with such crystalline beauty? Perhaps no one. And yet those utterances produce a pang of instant recognition. Beneath their burnished surface, we identify an emotional truth. . . . It is in its dealings with grief that The Winter Vault finds its deepest roots.” —Financial Times

“Set aside your spring chores and cancel the rest of your plans when you pick up The Winter Vault . . . When you finish, you’ll want to turn back and read it all again . . . Unforgettable.” —Bookpage

“A graceful, melancholy new novel . . . with the humane intelligence and lush language one might expect from the author of Fugitive Pieces. . . . Michaels produces passages of lyrical beauty, and eloquently expresses her horror at human violence inflicted on the land and its inhabitants.” —Guardian

“Anne Michaels is back . . . Think of The Arabian Nights, or the Odyssey…. A deeply affecting love story . . . Beautifully written.” —Toronto Globe and Mail

“Remarkable . . . Although the prose in the novel has the same quality of crystalline exactness [as] Fugitive Pieces . . . the book’s most striking feature is, in fact, its architecture or design . . . Full of arresting incidental detail and imagery.” —New Statesman

“Every bit as ambitious, original and startling as its predecessor . . . Its spiritual sweep is magnificent . . . The characters [are] transcendent . . . It is sublime . . . Moving and utterly engaging.” —The Ottawa Citizen

“Unfailingly eloquent. . . . It is a book that exudes the compulsive readability that only happens when an assured writer gets full grip on a compelling theme and explores it unsparingly.” —The Montreal Gazette