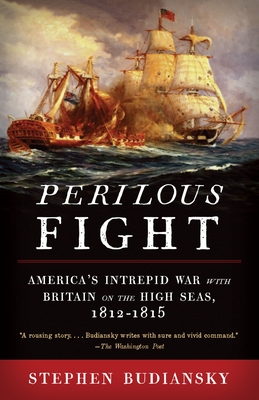 Terrific. Proves that first rate history writing can be both exciting and scholarly. Makes a trip to visit the U.S.S. Constitution almost mandatory. And don't mess with American sailors...even if you outnumber them 100 to 1. — Bill Lewis

In Perilous Fight, Stephen Budiansky tells the rousing story of the U.S. Navy during the War of 1812, when an upstart American fleet fought off the legendary Royal Navy and established America as a world power for the first time.

Through vivid re-creations of riveting and dramatic encounters at sea, Budiansky shows how this underdog coterie of seamen and their visionary secretary of the navy combined bravery and strategic brilliance to defeat the British, who had dominated the seas for more than two centuries.  A gripping and essential hsitory, this is the military and political story of how the U.S. Navy became a permanent and essential part of the nation’s defense.

Stephen Budiansky is a military historian and journalist. His writings have appeared in The New York Times, The Atlantic, Men’s Journal, MHQ, Civil War Times, and many other publications. His previous books include The Bloody Shirt, Her Majesty’s Spymaster, Air Power, and Battle of Wits. He lives in Leesburg, Virginia.

“A rousing story. . . . Budiansky writes with sure and vivid command.”
—The Washington Post

“An excellent new history of what was, in effect, American’s second war for independence. . . . Highly readable and engaging. . . . Budiansky illuminates and brings to life a conflict that, even for those of us who think we know our history, has always seemed obscure. . . . By turns grand and grandiose, tragic and mean and appallingly bloody, and often mordantly funny, like the worst of family feuds. . . . Budiansky is a master at cutting through complicated historical and technical material, and focusing on what’s essential. . . . It’s a book that many people, and especially those in the military, would read with profit.”
—Cleveland Plain-Dealer

“With excellent narrative, battle diagrams and photos, this book is a keeper. It’s timely, well-written, interesting and a recommended read. . . . A joy to read for the interested reader of history, the amateur historian, and at the same time a worthy reference for scholars”
—Vice Admiral Robert F. Dunn, The Washington Times

“Enlightening. . . . Thoroughly entertaining. . . . [Budiansky] has captured this swashbuckling era to perfection. . . . He paints all of the pictures from the grand to the gruesome.”
—The Post and Courier (Charleston)

“Excellent. . . . Budiansky is a highly gifted writer, and this is a book well worth recommending, not just for the history buff. There is much to ponder here with reference to our own overmatched wars, to the toll of pride and arrogance in warfare, and the vulnerability of a great power to an uncoordinated, scattered, but single-minded adversary. Most relevant is the insight into the American idea of waging war that prevails even today, first defined on the high seas in 1812-15.”
—Dallas Morning News

“Budiansky meticulously recreates three years of pitched and pyrrhic battles, while nicely folding in the collateral intricacies of rigging, reefing and tacking, the ambitions, caprices and cruelties of the captains and the exasperating policies of the politicians on both sides of the Atlantic. . . . Budiansky is strictly on the beam, both with nautical and literary sensibilities.”
—The Newark Star-Ledger

“A rousing story. . . . [Perilous Fight] brings clarity to a complex war that veered back and forth across the planet, from the lakes and forests of Canada to the English Channel and as far south as the waters of Brazil and Chile. . . . Budiansky knits together the action colorfully.”
—The Military Book Club

“Perilous Fight showcases Budiansky’s rare talent for writing history that is simultaneously enlightening, insightful, and entertaining. Impeccably researched and artfully written, it is a thoroughly enjoyable and eye-opening account of how America’s ‘Big Stick’ navy got its start.”
—Bill Sloan, author of The Darkest Summer and The Ultimate Battle