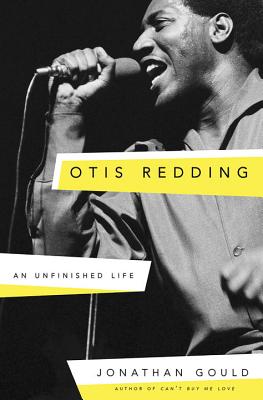 The long-awaited, definitive biography of The King of Soul, timed to coincide with the 50th anniversary of Redding's iconic performance at the 1967 Monterey Pop Festival.

Otis Redding remains an immortal presence in the canon of American music on the strength of such classic hits as “(Sittin’ on) The Dock of the Bay,” “I’ve Been Loving You Too Long,” “Try a Little Tenderness,” and “Respect,” a song he wrote and recorded before Aretha Franklin made it her own. As the architect of the distinctly southern, gospel-inflected style of rhythm & blues associated with Stax Records in Memphis, Redding made music that has long served as the gold standard of 1960s soul. Yet an aura of myth and mystery has always surrounded his life, which was tragically cut short at the height of his career by a plane crash in December 1967.

In Otis Redding: An Unfinished Life, Jonathan Gould finally does justice to Redding’s incomparable musical artistry, drawing on exhaustive research, the cooperation of the Redding family, and previously unavailable sources of information to present the first comprehensive portrait of the singer’s background, his upbringing, and his professional career.

In chronicling the story of Redding’s life and music, Gould also presents a social history of the time and place from which they emerged.  His book never lets us forget that the boundaries between black and white in popular music were becoming porous during the years when racial tensions were reaching a height throughout the United States. His indelible portrait of Redding and the mass acceptance of soul music in the 1960s is both a revealing look at a brilliant artist and a provocative exploration of the tangled history of race and music in America that resonates strongly with the present day.

JONATHAN GOULD is a former professional musician and the author of CAN’T BUY ME LOVE: The Beatles, Britain & America.   He divides his time between a home in Brooklyn and a house near Hudson, NY.

“[An] impressive biography…. Access to Redding’s surviving family members helps Gould flesh out his upbringing and offstage personality…. Music historians like Peter Guralnick, Rob Bowman and Robert Gordon have all done essential work on the history of Stax, but Gould takes a contrary and provocative position on the label’s relationship to its greatest star…. [He] makes a convincing case that, while Redding’s recordings are never less than compelling thanks to his remarkable voice, [Stax co-founder Jim Stewart’s] shortcomings…held Redding back as a songwriter and repeatedly stymied his popular momentum.”
—Alan Light, New York Times Book Review

“Magisterial… With meticulous scholarship, lively prose, and a tale that uses a singular musician as a springboard into interrogating America’s political and popular cultures, Gould has created a vital book that helps contextualize one of the most important figures in pop music.”
—Maura Johnston, Boston Globe

“An absorbing and ambitious book…[that] succeeds in making [Redding] seem a good deal more remarkable by taking the measure of the historical circumstances he emerged from…. Among the great pleasures…are [Gould’s] very considered assessments of each of Otis’s albums, track by track.”
—Geoffrey O’Brien, The New York Review of Books

“Jonathan Gould’s Otis Redding doesn’t so much practice revisionist history as simply get a complex story right, capturing the too-short life and career of the immortal Otis Redding with unerring perceptiveness, precision and cultural context. In short, Gould delivers the first biography to do Redding justice.”
—Steve Nathans-Kelly, Paste

“Gould…sets sky-high aspirations for his book, attempting not to merely chronicle Redding’s meteoric life, but to use him as the backdrop for a larger story about race in America, the history of soul music, and the rise of Memphis’ small but powerful Stax Records. He does that gracefully.”
—Dallas News

“An excellent and definitive biography… A master storyteller, Gould tackles Redding’s life by planting his flag firmly at the crossroads of individual genius and social and cultural context… [His] fabulous portrait…provides Redding with the “Respect” he richly deserves. Highly recommended.”
—Library Journal (starred review)

"A music biography with the depth to do its subject justice. Otis Redding (1941-1967) ranks high in the pantheon of 1960s musical luminaries, so it's fitting that [Otis Redding] ranks equally high among such work focusing on popular musical artists.... Better late than never, the soul master receives his considerable due in this superbly researched and written biography."
—Kirkus Reviews (starred review)

“Jonathan Gould’s much-heralded biography… builds beautifully, more like a great soul ballad than the dance hall hit so many music biographies aim at becoming. One feels the time that’s gone into the book’s organization, it’s exegesis, it’s every insightful and often quite-funny sentences.”
—Hudson Valley One

"Gould vividly brings to life the man Stax Records boss Jim Stewart called 'a walking inspiration'.... From his supreme triumphs to his one last heart-breaking phone-call to Zelma, devotees and soul scholars alike could not wish for a more thorough and sensitive portrait."
—Mojo

“Some of the best parts of Gould’s book are his incisive descriptions of Redding’s live performances and recording sessions.... But even more than his vivid re-creations of Redding’s composing and recording work, it’s Gould’s insightful portrayal of the Segregated South’s racial climate that makes Otis Redding: An Unfinished Life so compelling.”
—Paste

“Nuanced and well-researched…. [Otis Redding] belongs in the hands of anyone who cares about soul music in the sixties.”
—Booklist

"Jonathan Gould’s exquisitely written biography of one of the greatest singers of all time is spell-binding. His deep research superbly contextualizes Otis Redding’s way-too-short life and career, while his incisive critique of Redding’s work makes his music come alive on the page—leaving us yearning to have experienced the remarkable performer onstage."
—Holly George-Warren, author of A Man Called Destruction: The Life and Music of Alex Chilton, from Box Tops to Big Star to Backdoor Man

“In his biography of Otis Redding, Jonathan Gould summons up the teeming cast of hustlers, visionaries, and eccentrics who fed Otis' supernatural talent. It's a thrill to see Redding brought back to life in all his raw, flashing glory!”
—David Dalton, founding editor, Rolling Stone, and author of Who Is That Man?