Death in the City of Light: The Serial Killer of Nazi-Occupied Paris (Paperback) 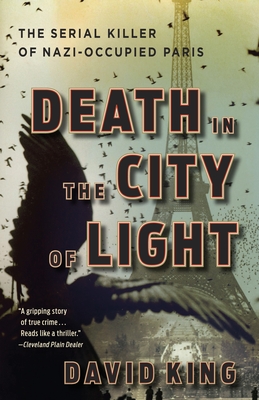 During their own reign of terror and brutality, Dr. Marcel Petoit committed crimes that caused even the Nazis to draw back in revulsion. Despite the inevitable comparison with Erik Larson's bestseller, Devil In the White City, this blood-curdling account of a serial killer who operated during the German occupation of Paris stands on its own as a uniquely memorable account of the headlong descent into murder and madness.

The gripping, true story of a brutal serial killer who unleashed his own reign of terror in Nazi-Occupied Paris.

As decapitated heads and dismembered body parts surfaced in the Seine, Commissaire Georges-Victor Massu, head of the Brigade Criminelle, was tasked with tracking down the elusive murderer in a twilight world of Gestapo, gangsters, resistance fighters, pimps, prostitutes, spies, and other shadowy figures of the Parisian underworld. But while trying to solve the many mysteries of the case, Massu would unravel a plot of unspeakable deviousness.

The main suspect, Dr. Marcel Petiot, was a handsome, charming physician with remarkable charisma. He was the “People’s Doctor,” known for his many acts of kindness and generosity, not least in providing free medical care for the poor. Petiot, however, would soon be charged with twenty-seven murders, though authorities suspected the total was considerably higher, perhaps even as many as 150.

Petiot's trial quickly became a circus. Attempting to try all twenty-seven cases at once, the prosecution stumbled in its marathon cross-examinations, and Petiot, enjoying the spotlight, responded with astonishing ease. Soon, despite a team of prosecuting attorneys, dozens of witnesses, and over one ton of evidence, Petiot’s brilliance and wit threatened to win the day.

Drawing extensively on many new sources, including the massive, classified French police file on Dr. Petiot, Death in the City of Light is a brilliant evocation of Nazi-Occupied Paris and a harrowing exploration of murder, betrayal, and evil of staggering proportions.

David King is the New York Times best-selling author of Death in the City of Light and Vienna 1814. A Fulbright Scholar with a master’s degree from Cambridge University, King taught European history at the University of Kentucky. His books have been translated into more than a dozen languages. He lives in Lexington, Kentucky.

"One of history's most macabre bouts of serial killing . . . David King, the author of Vienna 1814, has more than just fresh eyes and imaginative speculation to power his revisiting of this long-forgotten true crime."
—New York Times

"If you like true crime, put this book at the top of your reading list. . . . An exceptional piece of crime reporting backed by a gut-wrenching narrative that is masterful, haunting, and an incredible literary achievement."
—King Features Syndicate

"Unprecedented detail . . . The detail with which King explores the story is aided by the fact that not only did he have access to trial materials, including a stenographic record no one thought existed, but also the complete police dossier, which had been classified since the investigation began."
—Seattle Post-Intelligencer

"A page-turning, detective/manhunt/courtroom drama . . . King tells it with the skill of the best police and courtroom beat reporters, mixed with the sweeping eye of a social historian."
—Lexington Herald-Leader

“A new masterpiece of true crime writing . . . the most startling impression left by Death in the City of Light is of Paris itself, confronting the bestiality lurking behind its supremely civilized facade, and of the handful of Parisiennes who tried to serve justice in spite of it.”
—Salon.com

“This nonfiction account tracks the extensive manhunt and sensationalized trial of Dr. Marcel Petiot, who lured his victims by promising them safe passage out of Nazi-occupied Paris. King gained access to classified French police files in order to re-create this story of terror against the chaotic backdrop of war.”
—Goodreads September 2011 Movers & Shakers list

“Erik Larson's tour de force of narrative nonfiction hasn't been matched—until now…While this work is painstaking in its research, it still has the immediacy and gasp power of a top-notch thriller. True-crime at its best.”
—Booklist (starred review)

Praise for VIENNA, 1814: How the Conquerors of Napoleon Made Love, War, and Peace by David King

“Reads like a novel. A fast-paced page-turner, it has everything: sex, wit, humor, and adventures. But it is an impressively-researched and important story.”
—David Fromkin, author of Europe’s Last Summer

“Superb…a worthy contribution to the study of a critical historical event long neglected by historians. It should be in every European history collection.”
—Library Journal (starred review)