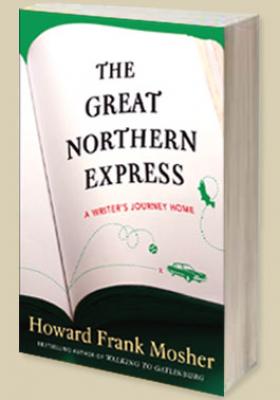 The beloved Vermont author recounts his three-month, 20,000-mile book tour, driving his ancient Chevy Celebrity (which barely made it) across the US solo (although with some imaginary friends) from Vermont and back. His descriptions of the places and people he encountered could very well come from one of his imaginative novels – but they’re all true! Hilarious, honest and thoughtful, this is an unforgettable adventure and journey of self-discovery by one of our finest writers. — Louise Jones

From bestselling, nationally celebrated author Howard Frank Mosher, a wildly funny and deeply personal account of his three-month, 20,000-mile sojourn to discover what he loved enough to live for.

Several months before novelist Howard Frank Mosher turned sixty-five, he learned that he had prostate cancer. Following forty-six intensive radiation treatments, Mosher set out alone in his twenty-year-old Chevy Celebrity on a monumental road trip and book tour across twenty-first-century America. From a chance meeting with an angry moose in northern New England to late-night walks on the wildest sides of America's largest cities, The Great Northern Express chronicles Mosher's escapades with an astonishing array of erudite bibliophiles, homeless hitchhikers, country crooners and strippers, and aspiring writers of all circumstances.
Full of high and low comedy and rollicking adventures, this is part travel memoir, part autobiography, and pure, anarchic fun. From coast to coast and border to border, this unforgettable adventure of a top-notch American writer demonstrates that, sometimes, in order to know who we truly are, we must turn the wheel towards home.

HOWARD FRANK MOSHER is the author of ten novels and two memoirs. He was honored with the New England Independent Booksellers Association's President's Award for Lifetime Achievement in the Arts and is the recipient of the Literature Award bestowed by the American Academy of Arts and Letters. His novel "A Stranger in the Kingdom "won the New England Book Award for fiction and was later made into a movie, as were his novels "Disappearances "and "Where the Rivers Flow North."

Praise for The Great Northern Express

“Like Howard Frank Mosher, I am a novelist and a cancer survivor, and I live in northern New England.  The journey Mr. Mosher describes is very familiar to me—made more poignant by the faultless details and inimitable characters the author encounters on his odyssey of self-discovery.  Mosher has always been a gifted storyteller; this time, there is an added euphoria in his storytelling—borne by the hope he and I share: for now, we have dodged a bullet that thirty thousand American men don’t dodge every year.”
—John Irving

"Whimsical....Mosher provides a genial reminder that adventures are possible at any age."
—Kirkus Reviews

“Hilarious, poignant, and honest, this bittersweet memoir is a sheer delight to read.”
—Booklist