Walking to Gatlinburg: A Novel (Paperback) 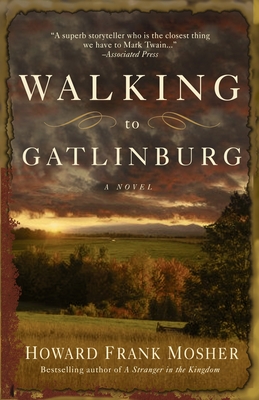 Morgan Kinneson searches for his brother, missing since the Gettysburg battle, in this powerful, beautifully written Civil War novel, dappled with magic and fantasy. — Louise Jones

“Get ready to head south from Kingdom Counry with Morgan Kinneson, who is in search of his brother Pilgrim in the midst of the Civil War. With a rune-covered rock from a hunted slave who made it as far as Vermont, Morgan maps his way south, encountering all manner of despicable and heroic figures by turn. This is Howard Frank Mosher's best told story yet, recounted in language and with a voice that will echo in readers' heads long after the book is closed.”
— Linda Ramsdell, The Galaxy Bookshop, Hardwick, VT

"A Civil War odyssey in the tradition of Charles Frazier’s Cold Mountain and Robert Olmstead’s Coal Black Horse, Mosher’s latest, about a Vermont teenager’s harrowing journey south to find his missing-in-action brother, is old-fashioned in the best sense of the word....The story of Morgan’s rite-of-passage through an American arcadia despoiled by war and slavery is an engrossing tale with mass appeal." –Publisher's Weekly

Morgan Kinneson is both hunter and hunted.  The sharp-shooting 17-year-old from Kingdom County, Vermont, is determined to track down his brother Pilgrim, a doctor who has gone missing from the Union Army.  But first Morgan must elude a group of murderous escaped convicts in pursuit of a mysterious stone that has fallen into his possession.

It’s 1864, and the country is in the grip of the bloodiest war in American history.  Meanwhile, the Kinneson family has been quietly conducting passengers on the Underground Railroad from Vermont to the Canadian border.  One snowy afternoon Morgan leaves an elderly fugitive named Jesse Moses in a mountainside cabin for a few hours so that he can track a moose to feed his family.  In his absence, Jesse is murdered, and thus begins Morgan’s unforgettable trek south through an apocalyptic landscape of war and mayhem.

Along the way, Morgan encounters a fantastical array of characters, including a weeping elephant, a pacifist gunsmith, a woman who lives in a tree, a blind cobbler, and a beautiful and intriguing slave girl named Slidell who is the key to unlocking the mystery of the secret stone.  At the same time, he wrestles with the choices that will ultimately define him – how to reconcile the laws of nature with religious faith, how to temper justice with mercy.  Magical and wonderfully strange, Walking to Gatlinburg is both a thriller of the highest order and a heartbreaking odyssey into the heart of American darkness.

HOWARD FRANK MOSHER was the author of thirteen previous books of fiction and nonfiction, including God's Kingdom. He received Guggenheim and National Endowment for the Arts fellowships, the American Academy of Arts and Letters Literature Award, the New England Book Award, and the 2011 New England Independent Booksellers Association’s President’s Award for Lifetime Achievement in the Arts. In January 2017, Mosher passed away at the age of seventy-four in Vermont.

Praise for Walking to Gatlinburg

"Mosher is a rare storyteller, able to both instruct and entertain, and he brings all his talents to this unforgettable and unique novel." –BookPage

"A Civil War odyssey in the tradition of Charles Frazier’s Cold Mountain and Robert Olmstead’s Coal Black Horse, Mosher’s latest, about a Vermont teenager’s harrowing journey south to find his missing-in-action brother, is old-fashioned in the best sense of the word....The story of Morgan’s rite-of-passage through an American arcadia despoiled by war and slavery is an engrossing tale with mass appeal." –Publisher's Weekly

"We are in the hands of a skilled storyteller, and every word matters. A captivating story, and one that cries for a sequel." –Kirkus, starred review

"[A] haunting and hallucinatory novel....Historical realism this isn’t but it is a violent, often puzzling picaresque with an invigorating take on the Underground Railroad and an unsettling vision of an America despoiled by the War between the States." –Booklist

“Mosher is an old-fashioned writer, a storyteller of the first order; he has written a page-turner in the best sense of the word.” –Boston Globe

“Mosher is a gifted storyteller with a solid sense of place and history.” –Cleveland Plain Dealer

“One of our very best writers … Mosher offers us a landscape, both natural and human, worth knowing, worth believing in.” –Richard Russo