Founding Gardeners: The Revolutionary Generation, Nature, and the Shaping of the American Nation (Paperback) | Northshire Bookstore
Skip to main content

Founding Gardeners: The Revolutionary Generation, Nature, and the Shaping of the American Nation (Paperback) 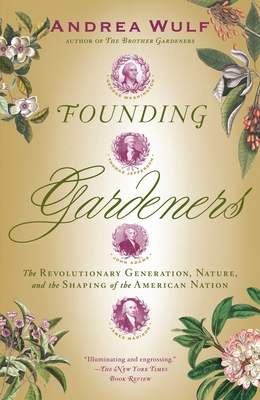 How greatly has gardening affected the history of the United States? More than you would ever think. Washington, Jefferson, Adams, and Madison were all avid gardeners, an enduring passion that shaped their shared vision for America's future. Gardening, agriculture, and botany were not only hobbies or means of production, but also fundamental to the ideology of the Revolution. Wulf lends an important, often overlooked perspective on the founding of America. Let us rediscover our agrarian roots! — Julietta Cole

Washington, Adams, Jefferson and Madison believed agriculture was the noble basis of democracy. In their lives and writing, their obsession with it shaped their political philosophies. Literate and fascinating look at our founders. A beautiful book with garden diagrams and color illustrations. — Louise Jones

From the bestselling author of The Invention of Nature, a fascinating look at the Founding Fathers like none you've seen before.

For the Founding Fathers, gardening, agriculture, and botany were elemental passions: a conjoined interest as deeply ingrained in their characters as the battle for liberty and a belief in the greatness of their new nation.

Founding Gardeners is an exploration of that obsession, telling the story of the revolutionary generation from the unique perspective of their lives as gardeners, plant hobbyists, and farmers. Acclaimed historian Andrea Wulf describes how George Washington wrote letters to his estate manager even as British warships gathered off Staten Island; how a tour of English gardens renewed Thomas Jefferson’s and John Adams’s faith in their fledgling nation; and why James Madison is the forgotten father of environmentalism. Through these and other stories, Wulf reveals a fresh, nuanced portrait of the men who created our nation.

Andrea Wulf was born in India and moved to Germany as a child. She trained as a design historian at the Royal College of Art and is the author of The Invention of Nature: Alexander Von Humboldt's New World and Founding Gardeners, The Brother Gardeners, and Chasing Venus, as well as the coauthor (with Emma Gieben-Gamal) of This Other Eden: Seven Great Gardens and 300 Years of English History. She has written for The Sunday Times, Financial Times, The Wall Street Journal and the Los Angeles Times, and she regularly reviews for several newspapers, including The New York Times, The Guardian, and The Times Literary Supplement.

“Illuminating and engrossing. . . . The reader relives the first decades of the Republic not only through [Wulf’s] eloquent and revelatory prose but through the words of the statesmen themselves.” —The New York Times Book Review

“A work of historical and horticultural importance, one that examines America’s origins through a new prism, and in so doing enriches Americans’ understanding of their heritage.” —Richmond Times-Dispatch

“Eloquently written and very beguiling. . . . [Wulf] is a writer of considerable grace and breadth of vision, and Founding Gardeners is an excellent portrait of the early years of the federal republic.” —The Plain Dealer

“A new interpretation of early American history, one that connects the founders’ zeal for agriculture and gardening to their thoughts on politics, independence, self-sufficiency, and patriotism. It’s terrific.” —The Philadelphia Inquirer

“One of those rare books that, by focusing on a single angle of vision, brings to life a whole era and cast of characters.” —The Dallas Morning News

“[Wulf] infuses her text with such liveliness, grace and original scholarship that the reader happily follows the author at a brisk trot wherever she may lead. And what a journey. For the first time, we are vividly shown how the founding fathers reinvented a system of agriculture geared to the needs of the young country.” —The Washington Times

“Wulf has wonderfully illuminated an often overlooked and very important aspect of the founders’ lives, providing new reasons to be inspired by them. . . . Delightful, enlightened reading.” —Nashville Scene

“A timely and passionate book, with resonances beyond today’s legion of new gardeners . . . Wulf traces the birth of the modern environmental movement back beyond Thoreau and Muir to the founding fathers’ passion for nature and plants.” —The Guardian (London)

“The book fizzes with energy.” —The Lady

“Highly enjoyable and thought-provoking. . . . Wulf combines a sure knowledge of garden history and eighteenth-century politics with a keen eye for domestic detail and evocative description. . . . The best kind of popular history.”  —The Irish Times

“Wonderfully engaging. . . . Wulf may be at her best when she invites us to enter the founding fathers’ gardens themselves. Her knack for description is marvelous. . . . Breaks new ground.” —The Times Literary Supplement (London)

“Founding Gardeners is genuinely illuminating, illustrated with a wealth of compelling detail and well-chosen quotations from personal correspondence, and provides succinct accounts of both the founding of America and some of the country’s earliest and most spectacular gardens.” —The Spectator

“The founding fathers really do come alive. . . . They express their deep belief in freedom through the way they garden much the same way they do in their writings.” —New York Journal of Books

“Superb. . . . This book will fascinate anyone interested in gardening, agriculture or American history, offering new insights into four familiar lives and conjuring up the gardens of the new republic.” —Mail on Sunday (London)

“Andrea Wulf found a timely topic, has done excellent research, and has written a wonderful book to demonstrate the thesis. . . .  Brother Gardeners, Ms. Wulf's previous book, was such fascinating reading that I slowed down as I anticipated its ending. In Founding Gardeners, she neatly continues the historical thread of the previous work: its blend of history and gardening is as interestingly written as before. . . . Extraordinary.” —The Martha’s Vineyard Times

“Carefully researched and well-told. . . . Their passion for plants will inspire pride in your garden plot that is indeed America under your very own gardening feet. . . . You will never garden the same way again.” —Michigan Gardener

“The reader's reward is a fresh appreciation for the talents, vision and energy of the men who shaped their farms and gardens along with the nation.” —The Post & Courier (Charleston)

“Founding Gardeners is a great achievement and deserves its place on the shelves of political as well as garden historians.” —Country Life

“An original, insightful look at the characters and passions of the men who shaped our country. Wulf’s colorful prose, superb research, and driving narrative make for an engrossing read that will give you new appreciation for horticulture’s influence on history.” —The American Gardener

“Artfully composed. . . . Wulf's scholarship, passion and pleasing prose make for a happy combination: a history book for gardeners, a gardening book for historians. A fresh look at the Founders that charms even as it irresistibly convinces.” —Kirkus Reviews, A Best Book of 2011