The Love of My Youth (Paperback) 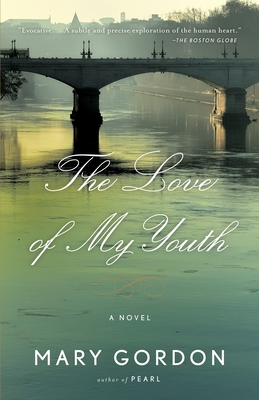 Truth and crystalline memories shine from every sentence in this novel, which absolutely delivers the promise of the title. Adam and Miranda meet by chance in Rome after being apart for more than 40 years. While taking the time to view one beautiful thing each day, they connect the shreds of their past and form a new kind of friendship. A lovely story well told. — Karen Frank

Miranda and Adam, high school sweethearts now in their late fifties, arrive by chance at the same time in Rome, a city where they once spent a summer deeply in love. At an awkward reunion, Adam suggests that they meet for daily walks and get to know each other again. Both have their own sense of who betrayed whom and long-held interpretations of the events that caused them not to part. But gradually, as they take in the pleasures of the city and the drama of its streets, they discover not only what matters to them now but also what happened to them long ago. From acclaimed author Mary Gordon, The Love of My Youth is a poignant look at first love, at the hopes and dreams of a generation, and at what became of them.

Mary Gordon is the author of six previous novels, two memoirs, a short-story collection, and Reading Jesus, a work of nonfiction. She has received many honors, among them a Lila Wallace–Reader’s Digest Writers’ Award, a Guggenheim Fellowship, an O. Henry Award, an Academy Award for Literature from the American Academy of Arts and Letters, and the Story Prize. She is the State Writer of New York. Gordon teaches at Barnard College and lives in New York City.

“Evocative. . . . A subtle and precise exploration of the human heart.”
—The Boston Globe

“Emotionally engaging and smoothly flowing, The Love of My Youth showcases Gordon’s power to write with controlled urgency, without dissembling or exaggeration, to reveal truths that are hard to face in the unsparing light of day, but without which we could not see ourselves as we are.”
—The New York Times Book Review

“Entrancing. . . . Gordon deftly awakens the strain of regret and desire that we too feel as we watch old loves and old selves recede.”
—Los Angeles Times

“Vivid. . . . Not so much a romance as a reckoning. . . . Gordon crafts a story layered with wise insights, and gives it a picture-postcard setting that lovers of Italy will delight in.”
—The Seattle Times

“Evocative. . . . A travelogue through time, as well as through some of Rome’s most beautiful spaces, Gordon's novel dangles out the fantasy of the faultlessly executed second chance. . . . An enchanting read.”
—Maureen Corrigan, NPR’s “Fresh Air”

“Gordon writes of the affection and wistfulness one has looking at the self growing smaller in the rearview mirror. And as a soulful and spiritual writer, she is in many ways just the person to write such a book. . . . The Love of My Youth provides us a nice leisurely space to wander—and wonder.”
—Cleveland Plain Dealer

“Gordon’s art in capturing the social and political texture of the [1960s] brings the story alive. . . . Armchair travelers will find much to enjoy.”
—San Francisco Chronicle

“Intricately realized. . . . Gordon’s evocation of thoughtful college students in the late ’60s (her own college era) is exceptionally nuanced and convincing.”
—The Atlantic

“Gordon is sensitive to the subtlest differences of class and religion, and the most satisfying aspects of The Love of My Youth are Gordon’s interpretations of how the differences in Adam and Miranda’s backgrounds impact their relationship. The novel is also filled with small resonating details, from the architectural beauties of urban Rome to Adam and Miranda’s anxious glimpses of their aging bodies in front of hotel mirrors. The Love of My Youth is as much about how we feel about our past and the choices we made and make, as it is about the love story between two young people.”
—BookPage

“Even if first love isn’t as rosy for most people as it was for Miranda and Adam, Gordon was definitely on to something when she shaped The Love of My Youth around that concept. For surely there is no one more likely than the love of your youth to remind you of everything you hoped to become.”
—The Associated Press

“Thoughtful and moving, Gordon’s latest captures the ardor and vulnerability of young love and the cautious circumspection of middle age.”
—Publishers Weekly