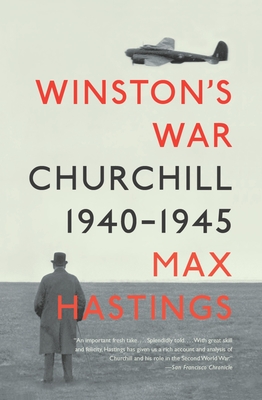 Justly admiring yet well balanced reaffirmation of Churchill's greatness as war leader, although his ideas and power became increasingly irrelevant. Among the foremost works of its kind, well timed for current generations with minimal understanding of The War. Hastings at his superb best. — Bill Lewis

A vivid and incisive portrait of Winston Churchill during wartime from acclaimed historian Max Hastings, Winston’s War captures the full range of Churchill’s endlessly fascinating character. At once brilliant and infuriating, self-important and courageous, Hastings’s Churchill comes brashly to life as never before.

Beginning in 1940, when popular demand elevated Churchill to the role of prime minister, and concluding with the end of the war, Hastings shows us Churchill at his most intrepid and essential, when, by sheer force of will, he kept Britain from collapsing in the face of what looked like certain defeat. Later, we see his significance ebb as the United States enters the war and the Soviets turn the tide on the Eastern Front. But Churchill, Hastings reminds us, knew as well as anyone that the war would be dominated by others, and he managed his relationships with the other Allied leaders strategically, so as to maintain Britain’s influence and limit Stalin’s gains.

At the same time, Churchill faced political peril at home, a situation for which he himself was largely to blame. Hastings shows how Churchill nearly squandered the miraculous escape of the British troops at Dunkirk and failed to address fundamental flaws in the British Army. His tactical inaptitude and departmental meddling won him few friends in the military, and by 1942, many were calling for him to cede operational control. Nevertheless, Churchill managed to exude a public confidence that brought the nation through the bitter war.

Hastings rejects the traditional Churchill hagiography while still managing to capture what he calls Churchill’s “appetite for the fray.” Certain to be a classic, Winston’s War is a riveting profile of one of the greatest leaders of the twentieth century.

Max Hastings is the author of more than twenty books, including Catastrophe 1914: Europe Goes to War, Inferno: The World at War, 1939–1945, and Winston's War: Churchill 1940-1945. He spent his early career as a foreign correspondent for BBC TV and various newspapers, then as editor of Britain’s Evening Standard and Daily Telegraph. He has received numerous awards for both his books and his journalism. He lives in the English countryside west of London.

“An important fresh take. . . . Splendidly told. . . . With great skill and felicity, Hastings has given us a rich account and analysis of Churchill and his role in the Second World War. . . . I would recommend it highly both to those who wish an introduction to the subject and to the many who can’t get enough of reading about the war and about Churchill.”
—Peter Stansky, San Francisco Chronicle

“Hastings is exemplary, as readers of Armageddon and Retribution, his books on the defeat of Germany and Japan, will know, and this book is just as good.”
—The New York Times

“Excellent. . . . Hastings is an authoritative writer and Winston’s War is what readers have come to expect from him: exhaustively researched, scrupulously fair and balanced, and compulsively readable. . . . [Hastings] gives equal attention to Churchill’s greatness and his shortcomings, his achievements and his blunders. Despite the small library of books about this legendary figure, he offers fresh insights on every page. . . . Quite simply, this is a marvelous book.”’
—The Christian Science Monitor

“A magnificent achievement. . . . Fresh and different. . . . One of those rare books that create in the reader a palpable feeling of the excitement, fear, frustration, grief, dread, all-too-occasional elation, and numbing fatigue of those critical days.”
—New York Review of Books

“Hastings captures Churchill’s mix of charm, exhibitionism, sentimentality, and egotism. . . . [He] writes with the calm and authority that come from long experience and wide reading.”
—Times Literary Supplement (London)

“Hastings presents [Churchill] . . . as a ruthless, brandy-gulping Tory with the fire and the guts to beat Hitler. . . . In a crowded field, this is one of the best books ever written about Churchill.”
—Piers Brendon, The Sunday Times (London)

“A vivid and incisive portrait. . . . Winston’s War captures the full range of Churchill’s endlessly fascinating character. . . . Hastings rejects the traditional Churchill hagiography while still managing to capture what he calls Churchill’s ‘appetite for the fray.’”
—The Washington Times

Hastings steps back to take a long view of Churchill and put the man’s record in perspective. The result works wonderfully. . . . But Hastings goes out of his way to portray Churchill as a real human being, with foibles and quirks and a marvelous way with words, even off the cuff. . . . Winston’s War weaves it all together in a literate and thoughtful fashion. It’s a careful portrait of a man who still fascinates us almost half a century past his death.”
—St. Louis Post-Dispatch

“Hastings is an accomplished historian who knows World War II and other wars in and out. He uses a broad range of sources, including diaries of ordinary citizens, to put his subject into a public context.”
—The Seattle Times

“A compelling argument for viewing Winston Churchill as more of a statesman than a strategist. . . . Winston’s War skillfully blends biographical detail with military and diplomatic history, and provides a better appreciation of Churchill’s critical role in making future generations regard the European struggle of 1940-1945 as the Last Good War.”
—The Providence Journal

“It is phenomenally difficult to unearth fresh stories and anecdotes about a man as widely and deeply covered historically as Winston Churchill, yet Hastings succeeds again and again. . . . None can fail to admire his archival tenacity and sheer authorial reach.”
—Andrew Roberts, The Daily Telegraph (London)

“A rich and rewarding book, the fruit of many years of reflection on the conduct of war. It is enlivened by countless insights on matters great and small, and by a spare, trenchant style which holds the reader’s attention.”
—The Spectator

“Scrupulously fair and often deeply moving. . . . Hastings excels with all his character portraits, which brilliantly illuminate the key relationships, especially with Roosevelt and Stalin. Hastings is truly a master of strategy and high command.”
—Mail on Sunday (London)