Making Haste from Babylon: The Mayflower Pilgrims and Their World: A New History (Paperback) 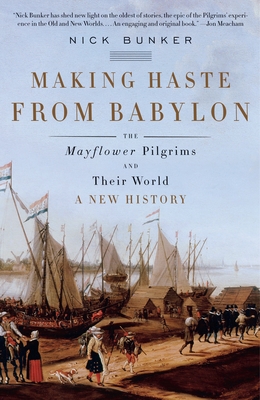 Don't be misled. This isn't a conventional history of Plymouth Plantation. Rather, it is a deeply researched, wide ranging and often fascinating study of how the "emigrant dissenters" came to be. Unusual yet effective. — Bill Lewis

At the end of 1618, a blazing green star soared across the night sky over the northern hemisphere. From the Philippines to the Arctic, the comet became a sensation and a symbol, a warning of doom or a promise of salvation. Two years later, as the Pilgrims prepared to sail across the Atlantic on board the Mayflower, the atmosphere remained charged with fear and expectation. Men and women readied themselves for war, pestilence, or divine retribution. Against this background, and amid deep economic depression, the Pilgrims conceived their enterprise of exile.

Within a decade, despite crisis and catastrophe, they built a thriving settlement at New Plymouth, based on beaver fur, corn, and cattle. In doing so, they laid the foundations for Massachusetts, New England, and a new nation. Using a wealth of new evidence from landscape, archaeology, and hundreds of overlooked or neglected documents, Nick Bunker gives a vivid and strikingly original account of the Mayflower project and the first decade of the Plymouth Colony. From mercantile London and the rural England of Queen Elizabeth I and King James I to the mountains and rivers of Maine, he weaves a rich narrative that combines religion, politics, money, science, and the sea.

The Pilgrims were entrepreneurs as well as evangelicals, political radicals as well as Christian idealists. Making Haste from Babylon tells their story in unrivaled depth, from their roots in religious conflict and village strife at home to their final creation of a permanent foothold in America.

A graduate of King’s College, Cambridge, with a master’s degree from Columbia University, Nick Bunker has had a diverse career in finance and journalism. His book An Empire on the Edge was a Finalist for the 2015 Pulitzer Prize in History and the winner of the 2015 George Washington Prize. A former investment banker and reporter for the Financial Times, he now lives with his wife, Susan, in Lincolnshire, England.

“One opens this book with a weary sense of resignation. More hagiography about national origins? Another group of founders? The Pilgrims? The Mayflower? The Compact? The first Thanksgiving? A ‘new history’? Please! Enough already. And yet . . . it’s not like that, not at all. To the contrary, Nick Bunker offers a remarkably fresh take on (it’s true) an old and well-worn story. . . . The evidence . . . adds up to a picture so full and vivid as to constitute a virtual ground-level tour of an otherwise lost world.” —The Washington Post

“A meticulous exploration of the lives of the Pilgrims before they even set sail. . . . It’s a comprehensive work of genius and a delight to read.” —GalleyCat.com

“A wonderfully engaging study. . . . There is so much here that is fresh and invigorating that Making Haste from Babylon will seem to some lovers of early American history a real page-turner with new readings and perceptive takes in each chapter. Bunker has written that rarest of books—a scholarly history with all the narrative punch of a novel.” —The Providence Journal

“Bunker . . . is simply a marvelous writer with a nose for the fascinating anecdote. . . . There’s some intriguing fact or story on every page . . . so much of Making Haste from Babylon [is] rich in the thrill of brushing up against the past and its fathomless mysteries.” —Salon.com

“Making Haste from Babylon is essential reading for those who think they know the story of the Pilgrims. . . . All this and more Bunker relates with enviable concision and verve.” —BBC History Magazine


“Prodigious . . . [Bunker’s] vivid style and bold analysis infuse this book with colour and pace, and the result is an indispensable contribution to understanding how it all began.” —Literary Review

"This superb book secures for the Pilgrims their iconic perch among the earliest founders of colonial America. Bunker…has succeeded in writing a major history, unprecedented in its sweep, of the Plymouth Colony. . . . Never before has such a comprehensive and thoroughly researched study of the subject appeared. . . . The results are stunning. Certain to be the dominating work on the Pilgrims for decades.” —Publishers Weekly (starred review)


“Nick Bunker has done the seemingly impossible: he has shed new light on the oldest of stories, the epic of the Pilgrims' experience in the Old and New Worlds.  With graceful writing and diligent scholarship, he has given us an engaging and original book.” —Jon Meacham


“I have rarely read a book which combines such a breadth of canvas...with such penetrating and detailed research.” —Patrick Collinson, Professor of Modern History, Cambridge University (emeritus)


“In this beautifully written and imagined book, impeccably researched, and full of  so many fresh insights and  discoveries,  Nick Bunker has given us the most grounded and convincing portrait  yet achieved of what drove the Pilgrim Fathers to seek their faith and fortune in the New World. . . . Combining intensive archive research with a time traveler’s eye  he conjures  a wonderfully evocative  sense of place. . . . It is a fabulous tale of our ancestors, but also the true founding moment of America.” —Michael Wood, British historian, documentary filmmaker, and broadcaster