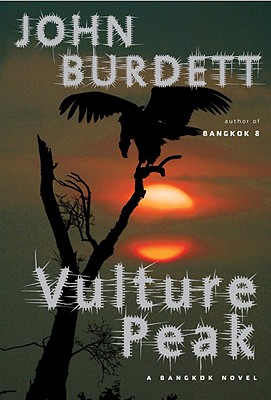 Burdett's detective Sonchai Jitpleecheep might be the last good cop in Bangkok - and even he stumbles sometimes. He'son the collective tail of twin body-part black marketeers in a thriller that combines Third World cunning with plenty of smart riffs on our new globalized reality. — Charles Bottomley

“Burdett's Sonchai Jitpleecheep novels feature an incomparable detective faced with some unforgettable crimes. In Vulture Peak, he is sent by his corrupt boss to investigate a triple murder that appears to be linked to traffic in human organs. Along the way, he runs into a powerful and powerfully, troubled set of twin sisters, and joins forces with a bipolar investigator from Hong Kong. Burdett's writing draws you in so completely that you may have jet lag by the time you reach the end. Fantastic!”
— Carol Schneck, Schuler Books & Music, Okemos, MI

Nobody knows Bangkok like Royal Thai Police Detective Sonchai Jitpleecheep, and there is no one quite like Sonchai: a police officer who has kept his Buddhist soul intact more or less despite the fact that his job shoves him face-to-face with some of the most vile and outrageous crimes and criminals in Bangkok. But for his newest assignment, everything he knows about his city and himself will be a mere starting point.
He's put in charge of the highest-profile criminal case in Thailand an attempt to bring an end to trafficking in human organs. He sets in motion a massive sting operation and stays at its center, traveling to Phuket, Hong Kong, Dubai, Shanghai, and Monte Carlo. He draws in a host of unwitting players that includes an aging rock star wearing out his second liver and the mysterious, diabolical, albeit gorgeous co-queenpins of the international body-parts trade: the Chinese twins known as the Vultures. And yet, it's closer to home that Sonchai will discover things getting really dicey: rumors will reach him suggesting that his ex-prostitute wife, Chanya, is having an affair. Will Sonchai be enlightened enough forget Buddha, think jealous husband to cope with his very own compromised and compromising world?
All will be revealed here, in John Burdett's most mordantly funny, propulsive, fiendishly entertaining novel yet.

John Burdett was brought up in North London and worked as a lawyer in Hong Kong. To date he has published seven novels, including the Bangkok series: "Bangkok 8, Bangkok Tattoo, Bangkok Haunts, The Godfather of Kathmandu, "and "Vulture Peak."

Praise for John Burdett and his Bangkok novels

“Burdett is purely and simply a wonderful writer.” —The Washington Post Book World

“Those who hunger for more tastes, sounds and smells of Bangkok as only Burdett can render them need have no fear . . . It is Sonchai’s unique ability to be both consummate insider and curious outsider that makes him the ideal cicerone to the high life and low life of Bangkok.” —San Francisco Chronicle

“Burdett’s attention to character and his studiously elegant prose style elevate this work well above the usual . . . Pensive, articulate Sonchai has a strong philosophical bent that makes him an excellent guide to the seamy Southeast Asian underworld.” — Entertainment Weekly

“Spellbinding . . . To conjure Burdett’s unique blend of garishness and gravitas, imagine a Conrad novel transformed into a video game . . . Scintillating.” —The Boston Globe

“Exuberant . . . Sonchai’s voice is so distinctively off-kilter as the narrator of his own misadventures, he could read the ingredients list of Singha beer out loud and readers would be entranced.” —Newsday