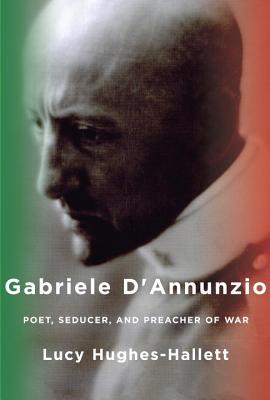 With the force of a hand grenade, this is the true story of one of the forgers of the 20th century - a maniacal poet and lover who drove an entire continent into the abyss. Scandalous - riveting - astonishing! — Charles Bottomley

Gabriele d’Annunzio was Italy’s premier poet at a time when poetry mattered enough to trigger riots. A brilliant self-publicist in the first age of mass media, he used his fame to sell his work, seduce women, and promote his extreme nationalism. In 1915 d’Annunzio’s incendiary oratory helped drive Italy to enter the First World War, in which he achieved heroic status as an aviator.

In 1919 he led a troop of mutineers into the Croatian port of Fiume and there a delinquent city-state. Futurists, anarchists, communists, and proto-fascists descended on the city. So did literati and thrill seekers, drug dealers, and prostitutes. After fifteen months an Italian gunship brought the regime to an end, but the adventure had its sequel: three years later, the fascists marched on Rome, belting out anthems they’d learned in Fiume, as Mussolini consciously modeled himself after the great poet.

At once an aesthete and a militarist, d’Annunzio wrote with equal enthusiasm about Fortuny gowns and torpedoes, and enjoyed making love on beds strewn with rose petals as much as risking death as an aviator. Lucy Hughes-Hallett’s stunning biography vividly re-creates his flamboyant life and dramatic times, tracing the early twentieth century’s trajectory from Romantic idealism to world war and fascist aggression.

Lucy Hughes-Hallett is an award-winning cultural historian and critic. She is the author of "Heroes: A History of Hero Worship" and "Cleopatra: Histories, Dreams, and Distortions." She has written on books, theater, and television for most of the leading British newspapers. For five years she was the television critic for the "Evening Standard" and has long been a regular contributor to "The Sunday Times "(London) Books Section. She has judged a number of literary prizes, and she is a Fellow of the Royal Society of Literature. She lives in London.

“A valuable outline of the tides of Italian public opinion at the turn of the century, as well as a stunning portrait of a man who lived by the credo ‘Life’s value is that of a spear to be thrown.’”
—The New Yorker

"As she creates her rich, effervescent, astute, involving portrait of the notorious 'poet, seducer, and preacher of war,' Hughes-Hallett spares us the whole ghastly blow-by-blow, focusing instead on representative vignettes while leaving us to understand that there were many more such in her subject’s unflagging, jam-packed existence. It is a canny strategy that prevents her reader from sinking under the weight of D’Annunzio’s overweening narcissism; it also underlines the unswervingly exterior character of her relentless subject. . . Hughes-Hallett analyzes D’Annunzio in the Jamesian manner: she holds him up to the light as an overly perfumed, deplorably behaved Continental, an exotic post-Nietzschean specimen whose irresponsible aestheticizing of everything—from love to war—inflamed a lethal irrationalism."
—Jonathan Galassi, New Republic

“Dazzling . . . a shrewd, challenging analysis that links [D’Annunzio’s] sadomasochistic psyche to his pitiless ideology. The result is a resonant study of the themes of power, masculinity, violence, and desire that made D’Annunzio such a striking emblem of his age.”
—Publishers Weekly, starred review

“A dexterous delineation of the celebrated Italian writer . . . [Hughes-Hallett] crafts an appealing combination of genres, blending elements of biography, fiction, and cultural, social, and military history to create about as complete an image as possible of this most protean personality . . . readers will delight in touring the deep, tangled wood of a most astonishing life with a most engaging and learned guide.”
—Kirkus Reviews, starred review

“Hughes-Hallett paints a richly detailed portrait of an eminently civilized sociopath, incapable of restraining his appetites for sex, excitement, and the most exquisite furnishings and utterly insensible to the emotional and financial damage he caused . . . D’Annunzio is appalling but, as Hughes-Hallett presents him, completely enthralling.”
—Ray Olson, Booklist

“Remarkable . . . a terrific piece of work—as audacious as it is gripping, as thorough as it is insightful and as stirring as it is shocking.”
—John Preston, The Daily Mail (UK)

“Hugely enjoyable . . .  Hughes-Hallett has a great talent for encapsulating an era or an attitude . . . The fact that almost 700 pages flew by bears testimony to how pleasurable and readable those pages were.”
—Tobias Jones, Sunday Times (UK)

“A splendid subject for a biography . . . Hughes-Hallett dances her way through this extraordinary life in a style that is playful, punchy and generally pleasing . . . In death, as in life, the amazing story of D’Annunzio is painted in primary colours, but with the darkest shadows.”
—Ian Birrell, The Observer (UK)

“How a rather diminutive poet, novelist and dramatist, with a compulsive urge to transgress, priapic sexual instincts, and a fascination with cruelty, blood and death came to be Italy’s most celebrated man of action and a precursor of Fascism is the subject of Lucy Hughes-Hallett’s engrossing and superbly written biography.”
—Christopher Duggan, Times Literary Supplement (UK)

“As Lucy Hughes-Hallett shows in this richly kaleidoscopic biography, d’Annunzio was much more than a harbinger of totalitarianism . . . In this scintillating study, full of wit and irony, she plumbs the depths of d’Annunzio’s horrible fascination.”
—Piers Brendon, The Oldie (UK)

“Lucy Hughes-Hallett’s luminously intelligent Life begins with the premise that ‘disapproval is not an interesting response’ to . . . the real inventor of Fascism.  Hughes-Hallett uses a legato/staccato technique . . . it works brilliantly.  A scholarly distillation as potent and elegantly balanced as the poet’s personal recipe for cologne.”
—Lisa Hilton Standpoint (UK)

“Beautiful, strange and original . . . an extraordinarily intimate portrait . . . If you want to understand fascism, you must start with d’Annunzio; and if you wish to understand him, then here is your book.”
—Daniel Swift, New Statesman (UK)

“Deeply evocative . . . It is not easy to make sense of the life of a man who was a silk-swathed aesthete, prophetic versifier, manic aviator and martial demagogue all in one. . . Ms Hughes-Hallett deftly unpicks the strands that compose and ultimately resolve these incongruities. She is a strong match for her subject, something that so many of the women in d’Annunzio’s life were lamentably not. Her style is rich, ironic and pugnacious; she jousts willingly with him and the reader becomes a spectator of this subtle and fascinating contest.”
—The Economist (UK)