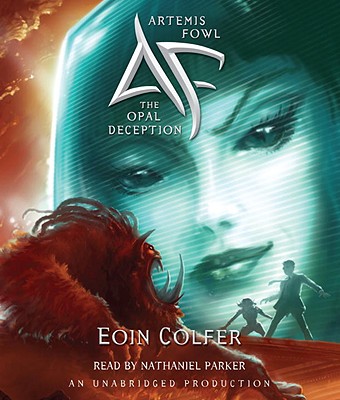 By Eoin Colfer, Nathaniel Parker (Read by)
$34.00
Hard to Find - May no longer be available

This is book number 4 in the Artemis Fowl series.

Criminal mastermind Artemis Fowl is back...and so is his cunning enemy, Opal Kobol. At the start of the fourth adventure, Artemis has returned to his unlawful ways. He's in Berlin, perparing to steal a famous impressionist painting from a German bank. He has no idea that his old rival, Opal, has escaped from prison by cloning herself. She's left her double behind in jail and, now free, is exacting her revenge on all those who put her there, including Artemis.

Meanwhile in the lower elements, Opal has planted a trap for Captain Holly Short and Commander Root of the LEPrecon fairy police--Root is killed, and Holly is framed for the murder. Instead of staying around to defend herseld, Holly rushes to the surface to warn Artemis. But before Holly and Artemis can get away, Opal arrives and abducts them both. Artemis is faced with a world he does not believe in and an enemy with an infernal plan to destroy this world forever.

Eoin Colfer is the "New York Times" bestselling author of the Artemis Fowl series, "Half Moon Investigations, The Wish List, "and" The Supernaturalist. "Listen to all of these on audio from Listening Library. Eoin is also the author of Eoin Colfer's Legend of . . . books, "Benny and Omar, " and "Benny and Babe." He lives in Ireland with his wife and two children.Visit his website at www.eoincolfer.com