We Are All Targets: How Renegade Hackers Invented Cyber War and Unleashed an Age of Global Chaos (Hardcover) 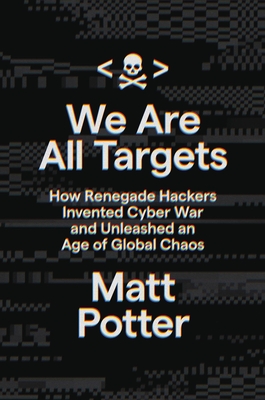 The incredible untold origin story of cyberwar and the hackers who unleashed it on the world, tracing their journey from the ashes of the Cold War to the criminal underworld, governments, and even Silicon Valley.

Two years before 9/11, the United States was attacked by an unknown enemy. No advance warning was given, and it didn't target civilians. Instead, tomahawk missiles started missing their targets, US agents were swept up by hostile governments, and America’s enemies seemed to know its every move in advance. A new phase of warfare—cyber war—had arrived. And within two decades it escaped Pandora's Box, plunging us into a state of total war where every day, countless cyber attacks perpetrated by states and mercenaries are reshaping the world.

After receiving an anonymous email with leaked NATO battle plans during the bombardment of Kosovo, journalist Matt Potter embarked on a twenty-year investigation into the origins of cyber war and how it came to dominate the world. He uncovered its beginnings – worthy of a Bond movie – in the last days of the Cold War, as the US and its allies empowered a generation of Eastern European hackers, only to wake up in the late 90s to a new world order. It's a story that winds through Balkan hacking culture, Russia, Silicon Valley, and the Pentagon, introducing us to characters like a celebrity hacker with missing fingers who keeps escaping prison, FBI agents chasing the first generation of cyber mercenaries in the 90s, tech CEOs, and Russian generals obsessed with a Cold War rematch. Never before told, this is the riveting secret history of cyberwar not as governments want it to be – controlled, military-directed, discreet, and sophisticated – but as it really is: anarchic, chaotic, dangerous, and often thrilling.

Matt Potter writes and presents on global politics, security, and crime for the Washington Post, the BBC, Telegraph, London Evening Standard, Men's Journal, and the Discovery Channel. He has reported for the BBC from Russia, the Balkans, the USA, Afghanistan, Japan, China, and Southeast Asia, and he has won two Sony Awards for radio. As a journalist, his nose for the unusual has seen his writing appear in places as diverse as the Daily Telegraph, Golf Monthly, Esquire, Sunday Telegraph, Jack, Maxim, the Irish Examiner and Q, and his stories on cocaine trafficking in Latin America have been published in Russian, Spanish and English. As a journalist in Belgrade, he broke the story of the NATO "spy" giving away secrets to Serbian forces on the web. His 2011 book Outlaws Inc has been published in 4 different languages and more than 17 countries, and won praise from places as diverse as The Literary Review, BBC5Live, the Washington Post, Bizarre magazine and Fox News. For almost two decades, he has ghostwritten for world leaders, Hollywood actors, CEOs, and rock stars. He lives in London.

“How often has the West reacted to a new threat with shocked surprise, as if it came from nowhere? From the Croatian Mind Hackers to the China Girl Security Team, from the criminal ‘back hole’ of Transnistria to the battlefields of Ukraine, gonzo journalist and habitual trouble-magnet Matt Potter takes us on an engaging, ground-breaking and alarming tour of the new virtual world.  He’s right that if only we had been paying attention to the hacker underworlds emerging in eastern Europe twenty years ago, we would have been better prepared.”—Mark Galeotti, professor at University College London and author of The Weaponisation of Everything

“Instead of perpetual peace the internet has ushered in a new, total, transnational state of digital war that is far from virtual. This is an unputdownable travelogue into its darkest trenches.” —Peter Pomerantsev, author of This Is Not Propaganda and Nothing Is True and Everything Is Possible

“A deeply revealing expose disguised as a spy-thriller, We Are All Targets pulls off that unique combination only the best narrative journalism does—it informs, educates, excites and entertains. It also terrifies.”—Jeffrey E. Stern, author of The Last Thousand and coauthor of The 15:17 to Paris