We Are Electric: Inside the 200-Year Hunt for Our Body's Bioelectric Code, and What the Future Holds (Hardcover) 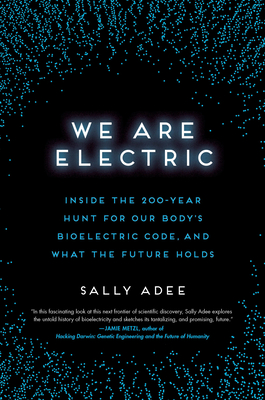 Science journalist Sally Adee breaks open the field of bioelectricity—the electric currents that run through our bodies and every living thing—its misunderstood history, and why new discoveries will lead to new ways around antibiotic resistance, cleared arteries, and new ways to combat cancer.

You may be familiar with the idea of our body's biome: the bacterial fauna that populate our gut and can so profoundly affect our health. In We Are Electric we cross into new scientific understanding: discovering your body's electrome.

Every cell in our bodies—bones, skin, nerves, muscle—has a voltage, like a tiny battery. It is the reason our brain can send signals to the rest of our body, how we develop in the womb, and why our body knows to heal itself from injury. When bioelectricity goes awry, illness, deformity, and cancer can result. But if we can control or correct this bioelectricity, the implications for our health are remarkable: an undo switch for cancer that could flip malignant cells back into healthy ones; the ability to regenerate cells, organs, even limbs; to slow aging and so much more. The next scientific frontier might be decrypting the bioelectric code, much the way we did the genetic code.

Yet the field is still emerging from two centuries of skepticism and entanglement with medical quackery, all stemming from an 18th-century scientific war about the nature of electricity between Luigi Galvani (father of bioelectricity, famous for shocking frogs) and Alessandro Volta (inventor of the battery).

In We Are Electric, award-winning science writer Sally Adee takes readers through the thrilling history of bioelectricity and into the future: from the Victorian medical charlatans claiming to use electricity to cure everything from paralysis to diarrhea, to the advances helped along by the giant axons of squids, and finally to the brain implants and electric drugs that await us—and the moral implications therein.

Sally Adee is a science and technology writer. Most recently, she was a features editor at New Scientist, where she wrote some of its most lasting content, including a 2012 feature that broke the bioelectricity technology to the general public and is cited in Yuval Noah Harari's Homo Deus. Adee's writing has appeared in The New York Times, the Economist, BBC Future, and Quartz. She has spoken on the Economist's Intelligence podcast, NPR’s Radiolab, Canadian Broadcasting's The Current, and BBC Breakfast. She is the science consultant for the TV adaptation of Naomi Alderman's The Power (Amazon Studios) and has won a US National Press Club award, a BT Information Security Award, and the Guild of Health Writers Award for her inside account of Silicon Valley's young blood clinics. Adee is a citizen of Germany and the US, and lives in London.

"Sally Adee manages that most difficult feat in science writing: taking a subject you didn’t know you cared about and making it genuinely fascinating and exciting. The ‘ohmigod-that’s-so-cool’ moments come thick and fast as she brings the science up to date, investigating today’s cutting edge and what the future may hold for bioelectric medicine. It’s a vast and hugely exciting area of scientific research, shared with infectious enthusiasm, a real depth of knowledge, a smart and funny turn of phrase. You’ll never think of life in the same way again."—Caroline Williams, author of Move!: The New Science of Body Over Mind

“The human body runs on an electricity we barely understand. Unlocking its secrets has the potential to usher in a new age of human health interventions that will revolutionize the way we comprehend and treat our most common maladies. In this fascinating look at this next frontier of scientific discovery, Sally Adee explores the untold history of bioelectricity and sketches its tantalizing, and promising, future.”—Jamie Metzl, author of Hacking Darwin: Genetic Engineering and the Future of Humanity

“If you thought genetics was the secret of life, think again: in We Are Electric, Sally Adee vividly explores the magic of bioelectricity, and how it affects every aspect of our being. A joy to read—I loved this book.”—Joseph Jebelli, author of In Pursuit of Memory: The Fight Against Alzheimer's

“As Sally Adee describes with great wit and insight, we are nothing without electricity: it’s the stuff of life, and of death. This is such a thrilling, compelling and energizing book - reading it, I couldn’t help picturing the author as Zeus, chucking lightning bolts at me. Such a timely book, too. The future is - I’m sorry, I can’t help it - electrifying.”—Rowan Hooper, author of How To Save The World For Just A Trillion Dollars

“The electrome may be as important to our understanding of life as the genetic code—yet few of us are aware of these groundbreaking developments. With scintillating storytelling, Sally Adee takes us to into the heart of this scientific revolution and its potential to transform medicine. We Are Electric is science writing at its very best—it shimmers with wit and insight. Prepare to be entertained, enlightened, and yes, electrified, by this brilliant book.”—David Robson, author of The Intelligence Trap and The Expectation Effect

“This book blew my mind. We Are Electric is a thrilling read, and Sally Adee explains everything from the intricacies of our electric cells to the potential for new medical treatments—and brain-hacking—with a sparkling clarity.”—Michael Brooks, author of The Art of More: How Mathematics Created Civilization

"In her debut book, [Sally Adee] paints a riveting (and often humorous) picture of 200 years of research on the bioelectricity coursing through our bodies, from debates over twitching frogs’ legs to devices developed to give sensation back to people with traumatic nerve injuries."—Scientific American

“[Adee] provides a wealth of material to think about. A clear, intriguing examination of a field with huge potential.”