Never in Finer Company: The Men of the Great War's Lost Battalion (Hardcover) 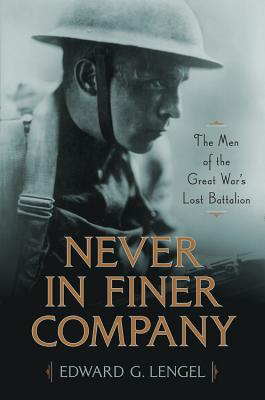 The "Lost Battalion" gained immense acclaim throughout America after withstanding unimaginable horrors of trench warfare in World War I. After returning home as heroes, their celebrity faded and their physical and emotional wounds festered. Now, a century later, Lengel's work helps ensure their legacy will not be forgotten. — Mike Hare

It was one of the most heroic events in American military history. Here is the larger-than-life story of World War I's "Lost Battalion" and the men who survived the ordeal, triumphed in battle, and fought the demons that lingered.

In the first week of October, 1918, six hundred men attacked into Europe's forbidding Argonne Forest. Against all odds, they surged through enemy lines -- alone. They were soon surrounded and besieged. As they ran out of ammunition, water, and food, the doughboys withstood constant bombardment and relentless enemy assaults. Seven days later, only 194 soldiers from the original unit walked out of the forest. The stand of the US Army's "Lost Battalion" remains an unprecedented display of heroism under fire.

Never in Finer Company tells the stories of four men whose lives were forever changed by the ordeal: Major Charles Whittlesey, a lawyer dedicated to serving his men at any cost; Captain George McMurtry, a New York stockbroker who becomes a tower of strength under fire; Corporal Alvin York, a country farmer whose famous exploits help rescue his beleaguered comrades; and Damon Runyon, an intrepid newspaper man who interviews the survivors and weaves their experiences into the American epic. Emerging from the patriotic frenzy that sent young men "over there," each of these four men trod a unique path to the October days that engulfed them -- and continued to haunt them as they struggled to find peace.

Uplifting and compelling, Never in Finer Company is a deeply moving and dramatic story on an epic scale.

Edward G. Lengel is a military historian, battlefield tour guide, and travel enthusiast who has published award-winning books on World War I and the Revolutionary War, including To Conquer Hell: The Meuse-Argonne, 1918, and Thunder and Flames: Americans in the Crucible of Combat, 1917-1918. He has contributed articles for Military History, Military History Quarterly, American Heritage, and American History, and appears frequently on television and radio, including the History Channel, NPR, and other networks.

"An exceptionally vivid tale of men at war. Unsparing and dramatic, Never in Finer Company illuminates the sacrifice, courage, and leadership of American doughboys in combat, as well as the toll wrung from them after the shooting stopped. Edward G. Lengel has written a rich and compelling story."--Rick Atkinson, Pulitzer Prize-winning and New York Times bestselling author of The Liberation Trilogy


"A powerful and timely reminder of American sacrifice and heroism a century ago in the war to end all wars. Lengel tells a deeply human and unforgettable story."--Alex Kershaw, New York Times bestselling author of The Bedford Boys and The Longest Winter


"The Great War remade our world and continues to cast its shadow more then one hundred years later. Edward G. Lengel, one of the great chroniclers of that conflict, has revealed a hidden war within that war and masterfully tells one of WWI's paramount stories. By carefully building the backstory of the main characters of the Lost Battalion, Sergeant York, and the intrepid war correspondent who initially captured this story, Lengel's powerful prose transports the reader back in time in a gripping, searing narrative of the men who transcended the bounds of human endurance and courage."--Patrick K. O'Donnell, bestselling author of The Unknowns: The Untold Story of America's Unknown Soldier and WWI's Most Decorated Heroes Who Brought Him Home


"Edward G. Lengel body-slams us into the muddy trenches of the Argonne Forest alongside the besieged doughboys of the Lost Battalion to confront the very nature of courage, cowardice, and heroism. Through the eyes of four men whose lives intersected in those awful woods, Never in Finer Company reveals how World War I not only changed them fundamentally but how it transformed America as well."--John F. Ross, author of Enduring Courage: Ace Pilot Eddie Rickenbacker and the Dawning of the Age of Speed


"The story of the 'Lost Battalion' is one of the great legends of the so-called Great War, and this new volume, written by a foremost historian of World War I, presents this tale in a new way by stripping away the legend to expose the more intriguing tale underneath...A tale of bravery, courage, and sacrifice, tempered with the knowledge that these men carried their burdens of loss, terror, and guilt far beyond the Meuse-Argonne forest."—New York Journal of Books


"[An] expert recounting of a devastating incident involving American soldiers...Lengel vividly shows how the Germans unexpectedly pinned down and cut off the 77th in an isolated pocket of the [Argonne] forest, trapping the soldiers for seven days without ammunition, food, water, or medicine...A must-read for anyone interested in WWI and the experiences of soldiers in battle."
—Publishers Weekly

"Never in Finer Company does a great job telling the story of some of America's greatest moments. The addition of this book in time for the World War I centennial will hopefully trigger greater interest by the American public in one of the most important epochs in our history."—ARMY Magazine

"[A] masterful account of the battle and the Lost Battalion's heroic stand."
—American Heritage

"In this excellent account, we look at the Lost Battalion from four viewpoints, men whose lives were forever changed because of what they experienced."—WTBF Radio